The second T20 between Pakistan and Zimbabwe was pretty much about one Pakistani batsman against the rest of the Zimbabwean bowlers.

The second T20 between Pakistan and Zimbabwe was pretty much about one Pakistani batsman against the rest of the Zimbabwean bowlers. If opener Ahmed Shehzad was excellent in the first T20 a couple of days ago, he was brilliant on Saturday at Harare, this time carrying his bat through and playing the major role in Pakistan putting up a big total on the board, batting first. When Zimbabwe batted, they showed some pluck for the second game in a row, but just like in the opening T20, they failed capitalise on their chances and hence ended up losing the series 2-0.

The beauty of Shehzad’s knock was that he did not go slam bang right from the start and yet ended up with an amazing 98 off just 64 balls. Unlike what some of the other batsmen do in T20 cricket, Shehzad picked and chose his deliveries, but when he hit them he ensured that they stayed hit. During this particular innings, Shehzad favoured the leg-side heave every time he wanted to slam a boundary. Credibly, he found the meat of the bat each time he attempted the big stroke on the on-side. 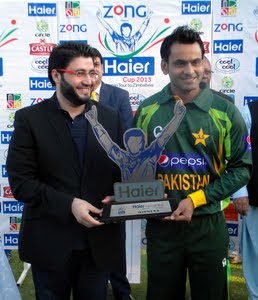 While Shehzad was a bit cautious in the early overs, his opening partner Nasir Jamshed went after the bowling, ensuring that Pakistan got off to a reasonable start after Zimbabwe skipper Brendan Taylor put them in to bat. His 23 off 17 balls gave Pakistan the early push. And once he was dismissed Shehzad took over. He went after the bowling without a worry in the world, and never mistimed one. With six boundaries and as many sixes, Shehzad saw to itthat he more than made up for his dot balls ending up with a strike rate of 153.

Shehzad got some very good support from skipper Mohammad Hafeez during the innings. The Pakistan skipper has been disappointing in recent times, but on this occasion there was no pressure on him since Shehzad was doing the bulk of the scoring. All Hafeez had to do was give him the strike. These are the kind of situations that Hafeez usually thrives in, and he was once again at his best, rotating the strike at will. It was only in the slog overs that Hafeez opened up, and his big hits were also crucial in Pakistan getting up to a big total.

For Zimbabwe, it was again a case of not having the bowlers to stop the rut. Shingi Masakadza was the only one who got a wicket, but he went for over 10 runs an over. None of the others had anything to show in the wickets column, and they were expensive as well. With the bat it was a case of déjà vu for them. Vusi Sibanda and Hamilton Masakadza got them off to a bright start against the pacers, but as soon as the spinners came on, they crumbled. Zulfiqar Babar and Hafeez did most of the damage claiming five wickets, as Zimbabwe succumbed to hand Pakistan the series rather easily.