After all the hullabaloo over security concerns, Pakistan are finally in India, to do what they were supposed to in the initially -- play cricket. Even before they have stepped on to the field, Pakistan have been hit by controversy.

After all the hullabaloo over security concerns, Pakistan are finally in India, to do what they were supposed to in the initially -- play cricket. Even before they have stepped on to the field, Pakistan have been hit by controversy. Shahid Afridi's statement that they are loved more in India than Pakistan has not gone down well, with even Javed Miandad lambasting him, followed by a legal complaint over the matter. This isn't the best preparation for Pakistan as they head into the big game against Bangladesh at Eden Gardens. But, the truth is that Pakistan is used to such controversies, and off-field issues rarely affect them.

Facing Bangladesh would be a massive challenge for Afridi's men. As recently as the Asia Cup, Bangladesh got the better of them, with a fine performance. In fact, in recent times, Bangladesh have held an upper hand over their big brothers, typified by their 3-0 thrashing of Pakistan sometime back in the one-day format. Pakistan would be looking for better performances this time round, especially considering the stature of the tournament. Another loss to Bangladesh wouldn't augur well for the future of Pakistan cricket. As for Bangladesh, they will be keen to add another jewel in their crown with one more triumph.

The big worry for Pakistan going into the clash at Eden Gardens is their poor batting form, which let them down in the Asia Cup. Contributions will be expected from Mohammad Hafeez at the top. If he can get the team off to good starts, things will definitely improve. Sharjeel Khan also had a horrific run in the Asia Cup, so his performance will be keenly observed. It is not all that bad for Pakistan if the openers fire as Umar Akmal, Shoaib Malik and Sarfraz Ahmed have been among the runs. Shahid Afridi will need to come to the party with the bat though, and lead by example.

Pakistan's bowling should pose a threat to Bangladesh, if they get a chance to bowl first, or defend a decent score. Mohammad Amir has been so superb since his comeback, it has been as if he was never away from the game. Mohammad Irfan has provided him good support while Malik, Afridi and Imad Wasim have done well in the spin department. It is the form of Mohammad Sami that will worry them most. 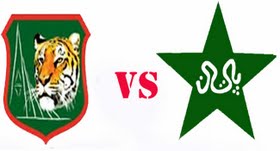 Bangladesh would be elated with the of kind of form they are taking into the Super 10. They absolutely demolished Oman in the knockout qualifier. More significantly, two of their match-winners came to the party. Tamim Iqbal has been in stupendous form, and his hundred against Oman, the first for Bangladesh, was an effort worth cherishing. With the ball, Shakib Al Hasan claimed four wickets, and also played a nice cameo -- another tick in the box.

One of the biggest finds for Bangladesh in recent times has been the emergence of Sabbir Rahman, who has constantly come up with sparkling knocks with the bat. Bangladesh would also hope that Mustafizur Rahman is fit as he has won them games with the ball in recent times. Looking at the form of the two sides, it wouldn't be wrong to say that Bangladesh have a slight edge.