Navdeep Saini on Auckland dismissal: Will regret when I go back and see the video

After blanking New Zealand 5-0 in the T20Is, India failed to take the momentum into the ODIs and conceded the series with a 22-run loss in Auckland. India allowed New Zealand to recover

After blanking New Zealand 5-0 in the T20Is, India failed to take the momentum into the ODIs and conceded the series with a 22-run loss in Auckland. India allowed New Zealand to recover from 197 for 8 to post a competitive 273, and then reduced India to 153 for 7. The visitors also rallied courtesy an eighth-wicket stand of 76, but it wasn’t enough in the end.

The story of the 2nd ODI was basically about two 76-run stands. The first between Ross Taylor (73 not out) and debutant Kyle Jamieson (25 not out), which lifted the spirits of New Zealand. The second one was between Ravindra Jadeja (55) and Navdeep Saini (45), which kept India with a fighting chance. Saini’s dismissal to Jamieson with the score reading 229 for 8 gave the Kiwis an upper hand.

Jamieson was the star of the show on debut for the Kiwis. After his unbeaten 25, he cleaned up Prithvi Shaw for 24 before coming back to clean bowl Saini. The performance saw Jamieson becoming the second New Zealand cricketer after Rob Nicol to win the man of the match award on ODI debut. 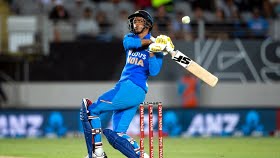 Following the match, Saini admitted at the post-game conference that he will regret his dismissal at the wrong time. Saini had hit Jamieson for a six but was bowled the next ball. "I will regret it when I go back and see the video. If I hadn't got out, maybe the result could have been different. Will regret that I took it so close and maybe could have gotten closer," Saini stated.

"We felt the wicket was flat and if we could stay till the end, the match could go close. So we were trying to contribute as much as possible and take the match to the end. Jadeja had told me that if you get a boundary ball hit it. Otherwise, take singles or doubles, try to keep patience and we can take the game to the end,” he went on to add.

Saini’s 49-ball knock featured five fours and two sixes. Despite the disappointment, the fast bowler said that he was happy to contribute to the team’s cause. "It is a good thing that the lower order is performing like this. If everyone performs, it is called a team effort. If batsmen cannot score, bowlers should. If bowlers are not taking wickets, fielders should help. It is a team, after all. I was thinking that I got to bat after a long time. As soon as I hit the boundary, I was in shock. Wow, the ball is coming really well off my bat, I thought,” Saini explained about his impressive innings.

Reflecting on the series loss, the pacer admitted it is disappointing, but added it is a good learning curve. "You feel bad that you lose the series obviously, but we will learn from our mistakes. Winning or losing doesn't matter much but our performances should get better," Saini further stated.

The third and final ODI will be played at Mount Maunganui on Tuesday.