Opener Murali Vijay and skipper Virat Kohli both hit easy hundreds as India dominated Day one of the one-off Test at Hyderabad. They 356/3 at stumps, at Rajiv Gandhi International stadium

Opener Murali Vijay and skipper Virat Kohli both hit easy hundreds as India dominated Day one of the one-off Test at Hyderabad. They 356/3 at stumps, at Rajiv Gandhi International stadium. Kohli was unbeaten on 111 and comeback man Ajinkya Rahane was undefeated on 45 when time were called. Vijay was dismissed for 108.

Captain Kohli, continuing his great form, brought up his 16th Test hundred, and also his first against Bangladesh, after India won the toss and elected to bat. Kohli hit 12 fours in his undefeated knock.

Earlier, Vijay also notched up his ninth Test hundred. He hit 12 fours and a six before being dismissed for 108 from 160 balls. He was dismissed by Taijul Islam. Cheteshwar Pujara also batted well but missed out on three figures. 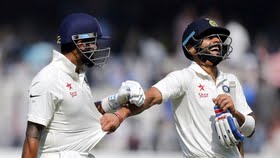 Vijay and Pujara featured in a second wicket partnership of 178 to rescue India from a poor start. Just as Pujara was looking set for a hundred, Mehedi Hasan had him caught behind by Mushfiqur Rahim for 83. Pujara faced 177 deliveries and hit nine fours.

Earlier, in the day, India's opening woes continued as Lokesh Rahul was sent back in the very first over of the day, bowled by Taskin Ahmed. Ajinkya Rahane, who was given his place back at the expense of India's first triple centurion Karun Nair, eased his way back into Test cricket in the company of Kohli. The Mumbai batsman hit seven fours during his stay at the crease.