India has been dealt with a big blow in the build-up to the three-Test series against South Africa as their match-winning bowler Jasprit Bumrah has been ruled out due to a minor stress fracture in his lower back.

Umesh Yadav has been named as Bumrah's replacement. The first of the three Tests will start at Visakhapatnam on October 2. "The injury was detected during a routine radiological screening. He will now undergo rehabilitation at NCA and will be monitored by the BCCI Medical Team. The All-India Senior Selection Committee has named Umesh Yadav as Bumrah's replacement," BCCI's official release said.

Umesh has been out of favor in recent times as Bumrah, Ishant Sharma and Mohammed Shami have been the preferred pacers. The last Test he featured in was against Australia in December 2018. So far, Umesh has played in 41 Tests and has 119 wickets to his name at an average of just over 33. 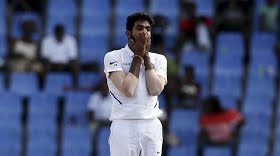 The series against South Africa will give Umesh a chance to revive his international career.

As for Bumrah, he has had a sensational start to his Test career. In 12 Tests since making his debut in South Africa early last year, Bumrah has claimed 62 wickets at a brilliant average of 19.24.

He recently claimed a hat-trick in West Indies in the second Test to go with his five-for in the first Test. He finished with 13 wickets in the two-Tests in West Indies.

Earlier, Bumrah was also instrumental in India’s maiden Test series win in Australia. Bumrah is now the first bowler from Asia to have claimed five-wicket hauls in Australia, England, South Africa, and West Indies, all this in only 11 Tests.

After the Visakhapatnam Test beginning on October 2, the second Test will be held at Pune from October 10 and the third in Ranchi from October 19.