Shane Watson roared back to form with 96 as Chennai chased a target of 176 set by Hyderabad with ease. Hyderabad's innings was built around Manish

Shane Watson roared back to form with 96 as Chennai chased a target of 176 set by Hyderabad with ease. Hyderabad's innings was built around Manish Pandey's blazing 83 not out by 49 balls after another fifty from David Warner. But, in the wake of Watson's brutal assault, it was far from enough.

Post the match-winning knock, Watson thanked both coach Stephen Fleming and skipper MS Dhoni for keeping the faith in him. “I can't thank Stephen Fleming and MS Dhoni enough for their belief in me. Most of the teams I've played in, I would have been dropped by now but they showed the trust in me,” Watson said in the post-match presentation ceremony.

Watson added he was desperate to get out of the bad patch of form and the early luck was something he possibly needed. “I was due for runs, that's for sure. I was doing alright in the PSL and in the BBL too, striking the ball well during those tournaments. But I needed some things to go my way like it did today when Bhuvi was all over me," he added. 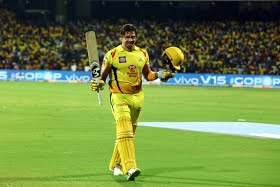 MS Dhoni said it was the team management decided to carry on with him for he has been a match-winner and bad been batting well in the nets as well. "Whatever small innings he played so far, he was middling them well although he did struggle a bit.

“This is the time when you need to back them. The management's thinking was to give him as many games as possible. The team winning also means that a player gets more games than he would actually get," the C skipper admitted.

Dhoni was also asked about his team's consistent success, which brought out his cheeky side. “If I tell everyone what it is, they won't buy me at the auctions. It's a trade secret."