Alastair Cook's decision to step down as captain of the England cricket team has earned praise from the Director of Cricket, Andrew Strauss. The latter also revealed that the successor to Cook will be named within a fortnight, before the one-day team leaves for the Caribbean,

Alastair Cook's decision to step down as captain of the England cricket team has earned praise from the Director of Cricket, Andrew Strauss. The latter also revealed that the successor to Cook will be named within a fortnight, before the one-day team leaves for the Caribbean, which will be on February 22. Amid much speculation, Cook resigned from England's Test captaincy on Monday, after leading a record 59 Tests. Vice captain Joe Root is most likely to take over from Cook. Whoever does take over the mantle eventually will get a full four months to prepare as England's next Test assignment is against South Africa in July.

Hinting that Cook had made the right decision following due consideration, Strauss told Sky Sports, "This wasn't one of those situations when it was right for me to persuade him to carry on. I've been there myself. You either know if you have got it in you to carry on, or, deep down, you know it's time to step aside.

"He did it the right way. He didn't jump to conclusions, he allowed the dust to settle after the India tour, he took some time to speak to the people closest to him, whom he trusted. I support and understand that decision."

Cook had been under pressure to retire as captain following the disastrous 0-4 result in India, the same country where he led his team to a historic win in 2012, shining as leader with the bat. "When the India tour finished, Alastair said to everyone that he'd sit down with me and talk things through both the learnings from the India tour and what the England team could do to get better, but also his own position.

"We met up in January and I was interested to see how he had fared in India. I know how draining the England captaincy can be, especially on a long tour away from home when you are on the wrong end of the result. 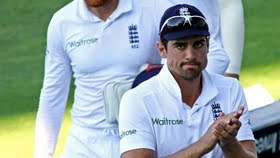 "So we had a conversation around that, and it was pretty clear that Alastair knew how much drive, determination and energy was going to be required of the England captain in the next 12 months or so.

"He had some thoughts and reservations about how much he had left in the tank as England's longest-serving Test captain, and it was right that we didn't jump to conclusions, and let the dust settle. I allowed him to go away and think further. But, over the last ten days or so, it was clear his mind was made up," Strauss revealed.

Proved about likely successor Joe Root's lack of experience as leader, Strauss played it down. "That is the reality in this day and age. It's very hard for England players to get a great deal of county captaincy experience. But on one level there's only so much you can do to prepare yourself. I think playing in the set-up for a number of years and understanding the demands is more important.

"Joe has done a very good job as vice-captain. He's matured a lot over the last two years and there is absolutely no reason he won't be one of the strong candidates," Strauss admitted.