BAN vs IND 1st ODI Review: Bangladesh continued their impressive run at home in ODIs by registering a memorable 79-run triumph over a shell-shocked India in the first match of the three-game series at Mirpur

Bangladesh continued their impressive run at home in ODIs by registering a memorable 79-run triumph over a shell-shocked India in the first match of the three-game series at Mirpur. The win is a growing list of Bangladesh’s triumphs against top teams, and succeeds their 3-0 thrashing of Pakistan prior to hosting India. The victory was all the more fruitful for the hosts since they discovered a new hero in fast bowler Mustafizur Rahman, who claimed 5 for 50 in his very first appearance, to derail India’s chase of 308. 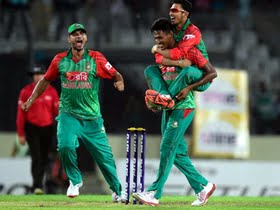 India began well in the chase as Shikhar Dhawan (30) and Rohit Sharma (63) added 95 for the first wicket, but once the partnership was broken, Rahman took over. Rahman’s first ODI wicket was that of the well-set Rohit, who hit a fullish delivery to skipper Mashrafe Mortaza at mid-off. He dealt India with another big blow, deceiving Ajinkya Rahane with the slower ball, and having him caught. Coming back for his next spell, towards the end of the innings, he was equally deadly sending back Suresh Raina by destroying his stumps, and then having Ravichandran Ashwin caught behind very next ball.

The big moment followed for Rahman, when he claimed a fifth wicket on debut as Ravindra Jadeja holed out to long-on. Clearly, it was a debut to remember for Rahman, but the contribution of the other bowlers cannot be underestimated. Taskin Ahmed claimed two big wickets, that of Dhawan and Virat Kohli, as India lost their momentum after a good start. Dhawan top-edged an upper cut behind the wickets while Kohli played a loose stroke to get out for one. Raina (40) and Jadeja (32) flourished briefly, but did not do anything significant to trouble Bangladesh.

Earlier in the day, the Indian bowlers had an extremely tough day against Bangladesh’s batsmen. The openers Soumya Sarkar (54) and Tamim Iqbal (60) gave scant respect to the Indian bowlers as the scoreboard motored along in the first ten overs after a somewhat circumspect start. Mohit Sharma and Umesh Yadav had a particularly bad day, and the openers took an instant liking to them. Bangladesh raced to 100 in the 13th over when the desperate breakthrough came via a run out as Raina came up with a good fielding effort.

Following Sarkar’s departure, Tamim carried on the good work, but the introduction of Ravichandran Ashwin (3 for 51) turned things around. Tamim failed to clear the field against the offie, and Litton Das as well as Mushfiqur Rahim were sent back quickly by the bowler. India sniffed a comeback, but the trio of Shakib Al Hasan (52), Sabbir Rahman (41) and Nasir Hossain (34) provided Bangladesh with much-needed impetus as they crossed 300. Yadav finished with 2 for 58 in 8 while Mohit bowled 4.4 overs for 53. Chasing 300 has become easy these days, but not if you are up against a rampant Bangladesh at home.