Brett Lee: The fast bowler who could smile

How would history remember Brett Lee? As a tear-away fast bowler, who did justice to his talent and was among the best of his generation. As a bowler who picked up above 300 wickets in Tests as well as ODIs, and was, after the retirement of Glenn McGrath, the leader of the Aussie attack.

How would history remember Brett Lee? As a tear-away fast bowler, who did justice to his talent and was among the best of his generation. As a bowler who picked up above 300 wickets in Tests as well as ODIs, and was, after the retirement of Glenn McGrath, the leader of the Aussie attack. As one of the greatest bowlers, who could hit the ball a long way as well. Yes, all of these will come in to the equation when the tributes come flowing, and also every time the name of Lee comes up for discussion in times to come.

There is one aspect of the man, however, which separates Lee from the other fast bowlers of his era and the ones before – his endearing, charming personality. Quickies in cricket are known to be mean and, at times, rude as well. Some swear at the batsmen on every possible occasion, others even end up spitting. It wouldn’t have been surprising had Lee followed a similar path since Aussie fast bowlers have been the biggest culprits in this aspect. However, such ugly behaviournever crept into Lee’s game. He was among the rare breed who could smile at the batsman every time beat him for pace. Rarely, he had a word of advice for the one with a willow at the end other. Even those were just friendly batters, with nothing nasty coming out. 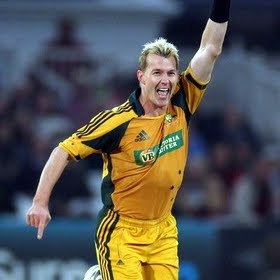 Lee’s gentleman-like conduct is all the more reason why he earned great respect not only in world cricket, but around the world. In a day and age where a number of fast bowlers are throwing the talent away, by getting involved in unnecessary controversies and being embroiled in match-fixing, Lee has managed to stay away from the bad elements entirely, proving that temptationsof easy money can be kept at bay. Never once during his 13-year-long career did the gentleman Lee feature in any sort of controversies. During his earlier days, there were brief talks of his action being suspect and, during the tri-series against India earlier this year, he was accused by some of obstructing Sachin Tendulkar as the Indian maestro tried to make his crease. Those some were, however, jingoistic Indian media personal and biased ‘experts’, who couldn’t digest the simple fact that Lee was only standing his ground, which was something well within the rules of the game.

One of the reasons why Lee rarely got agitated on the cricket field was, perhaps, because he was a musician. It has been scientifically proven that music calms the soul, and Lee’s liking to the guitar is known to all. He always seemed happy with the musical instrument in his hand, and took forward his jovial nature into his game as well. Now that he has retired, don’t be surprised if he takes up a career in music. Of course, he already has a band, which also features his brother Shane, who also played for Australia briefly.

Brett Lee, thanks for all the entertainment. We’ll miss your beautiful, long run-up to the crease, the smooth bowling action and pacy deliveries thatbeat the best of batsmen. Above all, we’ll miss your smile, for that’s what made you stand out from the crowd.