Surya, de Kock star with the bat as Mumbai displace Delhi from the top spot

Suryakumar Yadav and Quinton de Kock made impressive fifties as Mumbai beat the high on confidence Delhi side to replace them at the top of the points table. Krunal Pandya picked up two wickets and also hit the winning runs as Mumbai won the match by five wickets.

Shreyas Iyer won the toss and chose to bat first, given all of their success thus far had come from chasing. Prithvi Shaw was caught at covers as early as the third ball of the match as Boult drew first blood. Ajinkya Rahane, playing his first match this season due to Pant’s injury, began well with a couple of classy boundaries off Pattinson. However, Krunal Pandya came to trap Rahane leg before wicket. That didn’t stop Dhawan from hitting boundaries off Krunal and Pattinson and skipper Shreyas too joined him in the act.

DC were going along smoothly with 8 runs per over at the 10 over mark with both the batsmen set. The spinners were bowling economically and the run rate wasn’t quite climbing up as the innings progressed. Trying to up the ante, Shreyas took on Krunal but found Boult at the boundary.

Stoinis joined the crease and looked set to do some serious damage with the willow as he smashed two successive fours off Boult. Stoinis however, was run out in the very next over as there was a mix up with Dhawan. Bumrah had two of his overs left for that meant DC could get only 35 off the final four with Dhawan finishing on 69* off 52 balls. 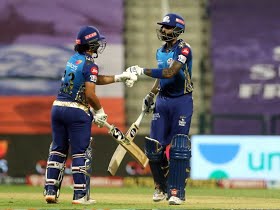 Mumbai had a quiet start in their pursuit of 163, with only 12 runs coming from the first three. Ashwin came to bowl the fourth and de Kock switched to 4th gear from that point. With a six and a four against Ashwin and a couple of sixes against Nortje, de Kock raced to 38 off 24. In between all the boundary hitting, Rohit holed out to Rabada at deep mid wicket off Axar. Suryakumar Yadav wasted no time to get going as he struck boundaries off Harshal Patel and Ashwin. In the penultimate ball of the 10th over, Ashwin gave some hopes of a comeback as he dismissed de Kock.

Ishan Kishan came to bat and witnessed Surya play some exquisite shots against Rabada, as he hit a four and a six before perishing a couple of balls later. Only 33 runs were required off the final five overs, but Hardik seemed to be in a hurry as he edged his second delivery against Stoinis.

Kishan and Pollard struck a boundary each in the 16th and the 17th over to make sure that the required rate still remained below 8. Rabada dismissed Kishan, but not before he had made a crucial cameo of 28 off 15. Only 3 came off the penultimate over, which meant 7 were required in the final over, and Krunal Pandya guided his team home with two boundaries.