Ireland displayed a lot of maturity in chasing down UAE target

CWC 2015 Ire vs UAE match review: There is something about the Ireland cricket team that you can't stop admiring them. And, that something is their positive attitude and their never say die spirit.

There is something about the Ireland cricket team that you can't stop admiring them. And, that something is their positive attitude and their never say die spirit. This is one of the reasons why they have been successful so consistently in the limited amount of time that they have featured in international cricket. Ireland's special talent was on display again, against the UAE on Wednesday. Although they were favourites to win the game, for a majority of the chase on the day they never looked like they would end up on the winning side. But, they somehow managed to get themselves back on track and chased down a tough total. 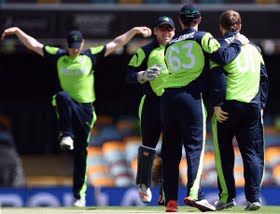 The best aspect of Ireland's chase against the UAE was the manner in which they approached the target. They got off to a poor start, and kept losing wickets at regular intervals. All four of their key players at the top of the order --Paul Stirling, skipper William Porterfield, Ed Joyce and Niall O'Brien registered low scores, a rarity in itself. Of them, Porterfield and Joyce got into the 30s, but Ireland needed a lot more from them. Not for the first time though, Ireland held themselves together even under tough circumstances. They did something similar against England in 2011, and produced an encore here albeit against a weaker side.

What was most impressive about Ireland's victory was the mature manner in which they went about their task. Gary Wilson, batting under immense pressure, displayed exemplary patience even as the required run rate seemed to be heading out of proportion. Wilson held one end up, ensuring the team remained with an outside chance till the end. He could have easily thrown in the towel, but the fact that he kept the scoreboard ticking along gave a clear indication that Ireland were not giving up as yet. The masterstroke of course was holding back Kevin O'Brien for the final onslaught. The move could have easily backfired, but it again showed that Ireland at least had a plan in place.

A victory by Ireland over UAE should not surprise many. But, the fact that it came after Ireland found themselves in dire straits will only raise the status of Ireland higher in international cricket. To progress very far in the event, and in general in international games, they still need to show significant improvements in their bowling department. Both against West Indies and the UAE, their bowling was taken to the cleaners in the last few overs. On both occasions, they were rescued by their batsmen. But, Ireland could find themselves in greater strife against better teams if they do not get their bowling act together.

UAE may have been disappointed to have lost from a winning position, but if they were told at the starting of the day that they would run Ireland so close, they would have accepted the same gladly. There were a couple of massive positives for UAE even in the losing cause. Shaiman Anwar played a sensational knock to become the first UAE player to register a hundred. His innings also took the team to a position of strength. Amjad Javed supported him very well lower down the order. He later excelled with the ball as well, and is a great asset to the side with his skills. The 40 plus skipper Mohammad Tauqir bowled excellently to get two big wickets. It wasn't enough for UAE to win the game, but they certainly won some hearts.