Delhi Daredevils, the lone IPL team surviving in this edition of the Champions League 2012 will take on the Highveld Lions tonight at Kingsmead in Durban.

Delhi Daredevils, the lone IPL team surviving in this edition of the Champions League 2012 will take on the Highveld Lions tonight at Kingsmead in Durban. So far the CLT20 has failed to live up to its expectations. There have been mediocre performances from the IPL teams barring the Delhi Daredevils who hardly played with two of their games getting entirely washed out. There hasn’t been much interest in the Television viewers when the non-IPL teams matches were on. The crowd has been decent though when it came to the IPL teams or the two South African teams – Lions and Titans. 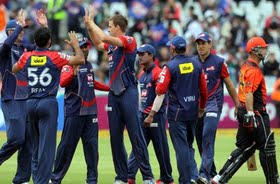 On paper, Delhi Daredevils are very strong compared to the Alviro Petersen led Lions. For the Lions to pull off an upset tonight, the Mahela Jayawardene led Delhi Daredevils has to really put up a flop show which is unlikely. The Daredevils team as we know is filled up with all the star players while the Lions hardly have any big names but perform like a team with all its players doing their bit.

The Lions have made it to the Semi Final with three wins and one defeat. They take credit of defeating strong teams such as Mumbai Indians and the Chennai Super Kings so there is no reason why they cannot repeat the same against the Delhi Daredevils. Their only defeat came against a strong Sydney Sixers which will be playing in the second semi final.

The Delhi Daredevils on the other hand as mentioned before had two washouts against the Auckland Aces and the Titans. Their entry into the Semi Finals was based on a powerful 52-run win over the Kolkata Knight Riders and the nervous 3-wicket win over Perth Scorchers.

Well all sounds exciting as the Delhi Daredevils meet the Lions tonight at Durban but for the action to take place, the weather has to stay good! In case of a wash out, the team with the most wins in the league stages goes through into the Finals. So in such a scenario, the Lions will walk through having posted three wins. Unfortunately or so, the Delhi Daredevils have only two wins in the Group Stage but it wasn’t their mistake that their two other games were abandoned!