End of the road for Younis Khan in ODIs?

The selection of the Pakistan team for the three-match ODI series against Australia hasn’t thrown a lot of surprises. Yes, this holds true in spite of the fact that Younis Khan and Umar Gul, two seniormost members of the team, have been axed.

The selection of the Pakistan team for the three-match ODI series against Australia hasn’t thrown a lot of surprises. Yes, this holds true in spite of the fact that Younis Khan and Umar Gul, two seniormost members of the team, have been axed. The dropping of both the players was on expected lines. Khan, after all, managed just five in four one-day games he played in Sri Lanka. Before the series as well, he hadn’t done much in the one-dayers he featured in.

Even though Pakistan’s chairman of selectors claims that Khan is being rested so that he can work on regaining form, it seems improbable for Khan to make a comeback in one-dayers. In fact, getting him back in the format would mean that Pakistan cricket is heading in a regressive path. The number three bat has been a great servant of the team for over a decade, but now it will be in the best interest of both him and the team that Khan concentrates solely on Test cricket. If he strikes form, he can still have something to offer to Pakistan. As for the ODIs, the think tank must now start hunting for their next number three. 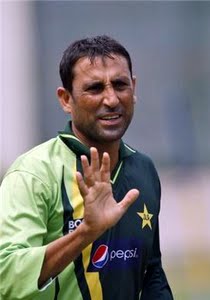 Shifting focus to Gul, the fast bowler, like Khan, had a mighty struggle in Sri Lanka. He managed only four wickets in five games, but more disappointingly went for plenty of runs. Unlike Khan, Gul still has time on his side and should get another opportunity to prove his worth. However, he definitely needs to improve his consistency. There have been days when Gul has bowled exceptionally, but also occasions when he has looked clueless in the midst of an onslaught. A strike bowler like Gul cannot afford to have too many bad days.

Like it most often happens with Pakistan, there were some intriguing selections. Kamran Akmal,who had an atrocious time in the World Cup last year, dropping more catches than the number of games he played, has been recalled to the squad. The selectors must be convinced that Akmal has improved on his keeping skills during his time away from the team. His batting abilities also give him a distinct advantage over the other keepers in the fray. Still, it would be a challenging task for Akmal as he makes another attempt at reviving his chequered career.

While Shoaib Malik’s recall isn’t surprising, one can only wonder why the selectors recall him and then drop him almost every alternate series. In the last year, the all-rounder may have been dropped and then selected at least three to four times. Such a selection policy wouldn’t benefit either the player or the team. Medium pacer Mohammad Sami’s axing, meanwhile, was on expected lines, for he failed to make any impact in the opportunities that he got in Sri Lanka.

Pakistan-Australia clashes are always interesting, and with the Aussies also under-performing in England, the contest would be even more exciting.