Indian off-spinner Ravichandran Ashwin, who has also bagged 12 wickets in the IND vs SA series so far, maintained his fifth rank in the table to be the only Indian bowler in the top-10 bracket. Ravindra Jadeja achieved a career-best ranking of 13th, jumping eight places in the latest ICC Test bowlers rankings. 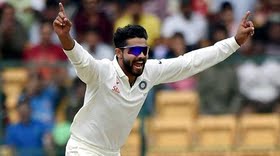 AB de Villiers is placed at the top spot in the ICC Test batsman rankings while Murali Vijay is the highest-placed Indian at 12. Cheteshwar Pujara is ranked 13th while Indian Test captain Virat Kohli stays at the 17th spot. In the all-rounders list, Bangladesh’s Shakib-al-Hasan continues to lead with Ashwin at the second spot and Johnson finishes his career at the fifth position.

Williamson has jumped three places to join Australia captain Steven Smith on the second spot following scores of 166 and 32 not out while Warner’s 253 and 24 have lifted him three places to fifth. The top five batsmen, four of whom are likely to feature in the third Tests in Nagpur and Adelaide later this month, are now separated by just 19 points with Smith and Williamson trailing de Villiers by six points and Warner another 13 points behind.

Ross Taylor, who won the player of the match award for AUS vs NZ 2nd Test at the WACA , has returned to the top 10 for the first time in 12 months. Taylor scored 290 and 36 not out, for which he has been rewarded with a jump of seven places that has put him on the tenth spot.