South Africa skipper Faf du Plessis admitted that India were too good after the hosts registered a six-wicket victory in the first one day international at Kingsmead, Durban

South Africa skipper Faf du Plessis admitted that India were too good after the hosts registered a six-wicket victory in the first one day international at Kingsmead, Durban on Thursday.

Kohli hit his 33rd hundred, and featured in a record 189-run third-wicket partnership with Ajinkya Rahane (79) as India won with ease. 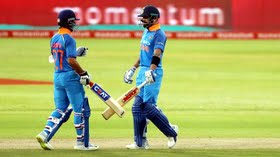 Du Plessis added his side did not bat well. "Definitely didn't get enough, we didn't bat well enough. I reckon we were about 50-60-70 runs short. Chris had a good partnership but as a batting unit we were disappointed," he said.

On the injury suffered when he hurt his finger, he said, "Just a few battle scars. Just went upstairs to get the fingers checked. One-day cricket the intensity is a lot higher. Happy to get through the game and feeling strong now.”

The second match of the six-ODI series will be played at the SuperSport Park, Centurion.