Apart from having beaten Australia in three successive Tests for the first time, the Indians have another reason to be extremely confident of whitewashing the Aussies with another Feroz Shah Kotla, in Delhi where the fourth Test begins on Friday.

Apart from having beaten Australia in three successive Tests for the first time, the Indians have another reason to be extremely confident of whitewashing the Aussies with another Feroz Shah Kotla, in Delhi where the fourth Test begins on Friday. They have a wonderful record at the venue, having won 11 Tests while losing six even as the rest of the games have ended in stalemates. Significantly, India have been victorious in eight of the last nine Tests played at the Kotla. The one they did not win was a high-scoringdraw against Australia in 2008. India’s last defeat at the venue came way back in November 1987 when the West Indians, led by Sir Viv Richards, clubbed the Indians by five wickets. As India and Australia get set to battle for one final time in the series, we look back at some excellent performances by Indians at the venue.

This was a one-off Test, in which Kambli recorded his second consecutive double-hundred. He had registered 224 against England at his home ground, the Wankhede Stadium, Mumbai in his previous Test. On this occasion, India batted first and the smashing left-hander blasted 227 runs with the help of 28 boundaries. He stay at the crease lasted over 400 minutes during which he faced 301 balls. Sidhu, Tendulkar and Amre also contributed half-centuries, as India eased to an innings and 13-run victory. 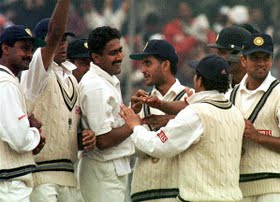 If it was Kambli in 1993, it was Kumble in 1999. This time, the opposition was arch-rivals Pakistan. Chasing an improbable 420 to win, Pakistan were cruising at 101 for no loss in the 25th over. This is when Kumble struck to remove Shahid Afridi for 41. The dismissal completely changed the complexion of the game, as Kumble went on to create history. He picked up all the remaining wickets in the Pakistan innings as the visitors crumbled from 101 for 1 to 207 all out, Saeed Anwar top-scoring with 69. Though a couple of decisions were debatable no one can deny that Kumble performed an incredible feat.

This was one of the few games that raised hopes of India having found a genuine all-rounder in Pathan. After India were dismissed for 290, Pathan aided Kumble in India’s fightback with the ball. While the leg spinner destroyed the Lankans with his six-wicket haul, Pathan grabbed three crucial wickets, including that of Kumar Sangakkara as India bowled out Lanka for 230. Then, in a surprise move, he was asked to open the innings in India’s second dig. The move paid off as Pathan made a wonderful 93 off 143 balls. India went on to win the Test by 188 runs.

This was the last Test played at the venue. Making his debut, Ashwin bamboozled the Windies batsmen. He grabbed three wickets in the first innings, including the big ones of Chanderpaul and Samuels. He was even better in the second essay, picking up six wickets, again accounting for the big names. West Indies were bowled out for 180, which paved the way for India’s triumph.