The 11th match of the Momentum One Day Cup 2020 will be played between Knights and Dolphins at the Mangaung Oval in Bloemfontein.

Knights have lost both of their matches by big margins as a result of which they are placed at the bottom of the Momentum One Day Cup 2020 points table. Knights are yet to open their account and have a net run rate of -1.565.

They will face the challenge of Dolphins who are placed at the second spot with two wins and one loss from three games. Dolphin have nine points and a net run rate of + 0.735.

Dolphins' wicketkeeper-batsman Grant Roelofsen is currently the second-highest run-scorer in the tournament with 237 runs from 3 innings at an average of 118.50. He has scored his runs at a strike rate close to 110 with one century and one half-century. The gloveman has the best of 147*. Sarel Erwee, Vaughn van Jaarsveld and Khaya Zondo have also played one good knock each.

Imran Tahir is expected to pick the most wickets for the team and already has 5 scalps from three matches with an economy of 5.82 and the best of 4/33. Among the pacers, Kerwin Mungroo has picked up 6 wickets from three games and has the best of 3/28

Knights' skipper Wandile Makwetu has scored the most runs for them at an average of 32 and is expected to be their top-scorer again.

Shaun von Berg has picked up five wickets for the team from 2 innings while Shadley van Schalkwyk and Tshepo Ntuli have also chipped in with four wickets from two matches each.

Today, together with Pradeep Singh, a credible analyst who writes for casinobetting.live/in/ and https://timesofindia.indiatimes.com/ helps us with today's predictions.

Let's have a look at the probable playing XI of both teams:

Who will win the toss? - Dolphins

Who will win? – Dolphins

Player of the Match – Grant Roelofsen

*NB these predictions may be changed nearer the start of the match once the final starting teams have been announced and we will be running ‘In–Play’ features, so stay tuned. 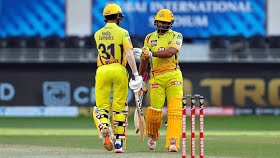 Oct 25, 2020: With not much to lose, CSK played freely today, and as a result walked away with a comfortable win over RCB, who would have hoped to top the table after winning. Gaikwad 65*(51) and Rayudu 39(27) starred with the bat as CSK chased down 145 with 8 balls to spare.