Pakistan pulled off a miraculous 2-wicket victory over South Africa in a low-scoring affair at Colombo. The Pakistanis were down and out at 76 for 7 in the 15th over chasing the target of 134.

Pakistan pulled off a miraculous 2-wicket victory over South Africa in a low-scoring affair at Colombo. The Pakistanis were down and out at 76 for 7 in the 15th over chasing the target of 134. Umar Akmal was the only hope left for the Pakistan but out of nowhere he got the support from Umar Gul who clubbed the ball powerfully to snatch the game away from the Proteas.

The South Africans put early pressure on the Pakistanis at 37 for 4 in 6.2 overs. Surprisingly it was spin that helped the Proteas to come back in the game after posting the low total. Just when the match seemed to be over, Umar Akmal (43* from 41 balls with 4 fours and a six) was joined by Umar Gul, who went onto score a sweet cameo of 32 (from 17 balls with 2 fours and 3 sixes). 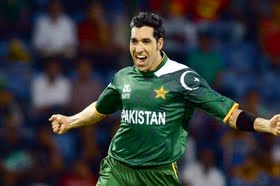 Pakistan through the 8th wicket stand of 49 runs got the equation down to 9 runs from the final over. Umar Akmal sealed the game by whacking a full toss from Morne Morkel for a six early in the final over. Pakistan won the contest with two balls to spare. The Man of the Match went to Umar Gul.

South Africa Innings: South Africa struggled to reach a mediocre total of 133 for 6 in 20 overs on a pitch that was slow and dry. The Pakistani spinners dominated the Proteas for most part of the South African innings.

The start for the Proteas was just too dull as the boundaries and sixes were hard to come by. By the 13th over, SA were going nowhere at 66 for 4. A brief partnership between JP Duminy and Skipper AB de Villiers (25 from 18 balls with 2 fours and a six) lifted their spirits slightly. Duminy fell in the penultimate over after scoring a crucial 48 (from 38 balls with 2 fours and 2 sixes). The southpaw struggled with his fitness and looked dehydrated during his innings.

For Pakistan, left arm spinner Raza Hasan, who opened the bowling came up with figures of 3-1-12-0. Hafeez took 2 for 23 in 4 overs and the likes of Ajmal, Afridi finished economically as well.

Toss and Teams: South Africa have won the toss and elected to bat first in the Super Eights Match against Pakistan at the R Premadasa Stadium in Colombo. Both the teams have made a change each to their playing XIs. Pakistan have brought in left-arm spinner Raza Hasan in the place of Sohail Tanvir. South Africa have replaced Faf du Plessis with Robin Petersen.