Bangladesh skipper Mashrafe Mortaza has praised his team for fighting injuries and making it to the final against India. Bangladesh and India will face off in the Asia Cup 2018 finale today

Speaking about the team’s injury woes, skipper Mashrafe Mortaza was quoted as saying in a CricBuzz report, ''We came through difficult situation like losing one player after another and doubt whether Mushfiq will play or not play and in that sense they really have learnt a lot. It was a great lesson for the boys. I think young players will learn that we must continue our fight till the last ball.

"It was really hard, because there was no cricketer like Shakib-Tamim. Shakib was fifty percent fit from the beginning [of the tournament]. We didn't have Tamim from the first match. The good part is, the boys haven't been disappointed. They kept fighting. Although we lost to Afghanistan in the group stage and to Indoa, they fought,” Mortaza added. 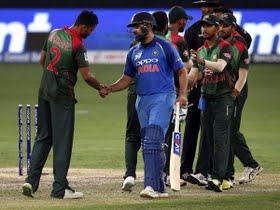 On what they need to do to beat India, the Bangladesh skipper added, ''So far we are proud. But we have to handle our emotions especially before the final match," Mortaza said. ''How we fight against them [India] is very important for us. They undoubtedly are the best team. But we will see tomorrow what our options are and whether we can fight with it,."