The First Test at Johannesburg ended in a thrilling draw with South Africa falling just 8 runs short of creating a new record for the highest ever run chase.

The First Test at Johannesburg ended in a thrilling draw with South Africa falling just 8 runs short of creating a new record for the highest ever run chase. Much to the relief of India, the match was a draw as they found themselves in a losing position following the tremendous 5th wicket stand between Faf du Plessis and AB de Villiers.

After Tea, both Faf du Plessis and AB de Villiers eased to their respective centuries and by drinks, the match was tilting towards SA quite heavily. The target in the final hour was just 66 runs from 15 overs with six wickets in hand. India by this time was desperate for wickets and at the same time had to curtail the scoring like anything. Ishant Sharma raised his game and gave India a vital breakthrough when he had AB de Villiers chopping an indipper onto the stumps to end a 205-run partnership.

AB de Villiers got out for 103 (from 168 balls with 12 fours) looking to run a short ball from Ishant to thirdman. Ishant by this time was bowling incredibly well along with a fresh looking Mohammed Shami. Ishant in particular, got plenty of lift off the track. Next man in, JP Duminy struck a beautiful boundary but got out for just 9, dragging a booming drive off Shami onto the stumps. 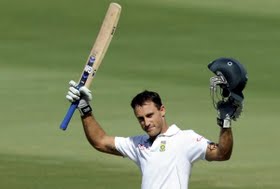 When Duminy got out, SA still needed 51 from 11.2 overs. SA bounced back after Vernon Philander joined Faf du Plessis. While Philander was striking the ball freely, du Plessis decided to play defensively. However, after a 35-run stand, Faf du Plessis ran himself out trying to steal a single from Ajinkya Rahane who for the second time in this innings had got the direct hit when it mattered.

Du Plessis walked off having scored a match-saving 134 (from 309 balls with 15 fours). His exit left SA with another 16 to get from 19 balls with three wickets. South Africa surprisingly closed the shutters and played it out for a draw with Philander on 25* along with Dale Steyn (6*). The Man of the Match award was given to Virat Kohli for his scores of 119 and 96.

Update at Tea on Day 5: The rock solid pair of Faf du Plessis and AB de Villiers have once again repeated their Adelaide act today. They batted out the entire afternoon session and now at Tea, South Africa sniff an opportunity of chasing down the world record target of 458. The homeside need 127 more runs to win from a possible 30 overs in the final session with six wickets in hand.

India’s hopes of striking with the second new ball immediately after Lunch were dashed by the excellent defences of Faf du Plessis and AB de Villiers. The pace trio of India got too tired, especially veteran Zaheer Khan, who leaked plenty of runs. The lone spinner R Ashwin wasn’t able to sustain any pressure as he hardly beat the bat.

At Tea, Faf du Pessis has moved onto 88 while de Villiers has got to 72. South Africa are well placed at 331 for 4 having already batted out 105 overs.

Update at Lunch on Day 5: It was a good session for India taking the wickets of Alviro Petersen and Jacques Kallis but they know that there is still plenty to do for a victory. South Africa are making the Indians earn for their breakthroughs in their second innings. The visitors now need five more wickets in 61 overs to win the Test match considering the fact that Morne Morkel is unlikely to bat.

Alviro Petersen got out early in the morning to Mohammed Shami. After getting floored by an inswinging yorker, Petersen dragged a backfoot defence onto the stumps off one that skidded through. The South African opener did not add any runs to his overnight score of 76.

After the early success, India faced a counter attack from Jacques Kallis. The legendary SA batsman played some exquisite drives before he was wrongly given out lbw to Zaheer Khan. It was otherwise a very good inswinger from Zaheer Khan which struck the pad of Kallis but with an inside edge. Kallis had ran away with 34 in just 37 balls with 6 fours before becoming Zaheer Khan’s 300th Test scalp.

By lunch, Faf du Plessis (42* from 114 balls) and AB de Villiers (25* from 46 balls) saw through South Africa to 236 for 4. India are just six overs away from taking the second new ball which could be their much awaited weapon to make further inroads.