RCB vs KXIP: Bangalore have the edge over poor Punjab

IPL 8 40th T20 RCB vs KXIP, Preview Live Scores: Royal Challengers Bangalore with face Kings XI Punjab in the 40th match of IPL at the Chinnaswamy Stadium in Bangalore on Wednesday night. Bangalore are one of the team who find themselves jostled in the middle of the points table

Royal Challengers Bangalore with face Kings XI Punjab in the 40th match of IPL at the Chinnaswamy Stadium in Bangalore on Wednesday night. Bangalore are one of the team who find themselves jostled in the middle of the points table, with nine points from four matches. They go into the match having squandered a great opportunity to win against Chennai Super Kings following a shocking battle collapse. Kings XI Punjab, on the other hand, would have lost further confidence following the defeat to Mumbai Indians, their fourth loss in a row.

Bangalore have blown hot and cold this season, but have a great opportunity to claim two points against a struggling Punjab. Their bowling was excellent against a strong Chennai, and the performance did not deserve to end on the losing side. Mitchell Starc was once again the standout performer with three wickets. He has made it a habit of striking big early, as he did against Chennai getting Dwayne Smith early. Starc found excellent support from David Wiese and Harshal Patel out in the middle. Yuzvendra Chahal had an off day, but that shouldn’t be a big cause of concern. 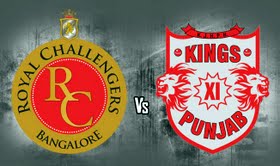 The kind of batting collapse they had against Chennai is something Bangalore can ill-afford. With no Chris Gayle, there was additional responsibility on Virat Kohli. And, while the skipper came up with a good innings, his run out saw the team slump rather miserably. AB de Villiers hasn’t proved to be as effective as expected, and the run out of Mandeep Singh made matters worse for them. Dinesh Karthik and the lower order had a great chance of delivering the goods, but they disappointed crumbling under pressure. Kohli would hope his team has learnt their lessons from the disappointing defeat.

There is really not much left for Punjab in the IPL apart from salvaging some pride. Last year’s impressive finalists slid further with yet another unimpressive show against Mumbai Indians. Punjab’s bowling was completely insipid against Mumbai openers Lendl Simmons and Parthiv Patel, with Mitchell Johnson being particularly disappointing. He was taken to the cleaners easily. In fact, but for a brief phase in the slog overs, where Johnson, Sandeep Sharma and Anureet Singh bowled good yorkers, Punjab were pretty poor in the bowling department. Even the spin of Axar Patel did not make much of an impression.

Punjab’s batting has been equally below par, and the sequence continued against Mumbai. Virender Sehwag was out cheaply again, so were the other big guns, Glenn Maxwell and George Bailey. The lack of runs from these key players has hurt Punjab badly. David Miller hung around for a while against Mumbai, but with no support his knock also was in vain. Also, opener Murali Vijay just hasn’t looked the force he was for Chennai. All permutations and combinations point towards a Bangalore win, unless Punjab can somehow pull themselves together.