Gautam Gambhir has been advised rest for six weeks to nurse his 'sore shoulder' and is likely to miss the West Indies tour starting June 4. Suresh Raina will be leading the team in the One-day International series in Gambhir's absence.

Gautam Gambhir has been advised rest for six weeks to nurse his 'sore shoulder' and is likely to miss the West Indies tour starting June 4. Suresh Raina will be leading the team in the One-day International series in Gambhir's absence.

Gambhir, the Kolkata Knight Riders captain, was carrying a shoulder injury right through out the Indian Premier League (IPL) and Friday looked in pain while playing against Mumbai Indians in the eliminator at the Wankhede Stadium here. He had injured the shoulder during the final of the World Cup against Sri Lanka in April.

Knight Riders' team physio Andrew Leipus, in a letter to the Board of Control for Cricket in India (BCCI), said that Gambhir needs at least four-six weeks of rest and also asked the board's medical committee to look into the player's injury management. 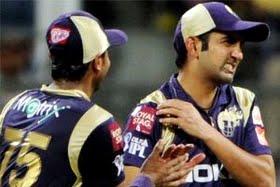 'The clinical findings supported the mechanism of the onset of the acute injury, however, he did report having corticosteroid injections on two occasions over the previous few years. In the last match where KKR played MI, Gautam again felt an aggravation of the shoulder pain on one particular throw,' Leipus said in his letter.

'On arrival in Mumbai we thought it was prudent to get both an MRI and a consultation with a leading shoulder orthopaedic surgeon. Both the doctor and myself believe that he should follow an intensive, supervised and conservative rehabilitation pathway. But for the best outcome, he will need to avoid both throwing and batting for a period 4-6 weeks,' the letter said.

'In this regard, I would expect that the BCCI medical committee would need to consider the ongoing management of Gautam's shoulder injury beyond the IPL and the possibility of his missing any immediate future tours until the shoulder is fully rehabilitated,' the letter added.

Gambhir was appointed skipper for the West Indies tour in the absence of Mahendra Singh Dhoni, who was advised rest.