Rain halted India's charge in the second Test against the West Indies here on Thursday after Ishant Sharma's six-wicket haul helped India dismiss the hosts for 190 and take an 11-run first innings lead on a rain-affected day three.

Rain halted India's charge in the second Test against the West Indies here on Thursday after Ishant Sharma's six-wicket haul helped India dismiss the hosts for 190 and take an 11-run first innings lead on a rain-affected day three.

On another stop-start day, Marlon Samuels tried to rescue the hosts' first innings but couldn't find support from the rest of his teammates who surrendered to Ishant's aggression. 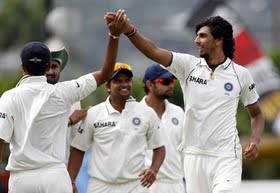 The Indian openers Murali Vijay (3 not out) and Abhinav Mukund (8 not out) then safely negotiated a tricky period before tea and then came out to play the four balls weather allowed after tea to reach 23 for no loss, an overall lead of 34 runs.

Earlier, it took the lanky Ishant just one over after the second rain delay to take the last two West Indies wickets. While Ravi Rampaul became Ishant's fifth victim, Fidel Edwards was his sixth in a spell of 21.5-7-55-6.

Top-scorer Samuels (78 not out) was left stranded at the other end in another dismal show by the West Indies batting lineup.

In the afternoon, Samuels' 77 not out took West Indies just 12 runs away from overhauling India's first innings total of 201 when rain came again to stop play after lunch.

Though Samuels returned to his free-scoring ways after lunch to guide West Indies' recovery, it was Harbhajan who delivered the first blow to raise India's hopes of taking a first innings lead.

On a tossed up Harbhajan delivery outside the off stump, Carlton Baugh's (2) attempt to drive took an edge that deposited into the palms of a diving Rahul Dravid in the slips.

That was followed by a half century by Samuels who continued to impress in his return to international cricket.

Both Samuels and West Indies skipper Darren Sammy started playing their shots as the hosts got a move on in the second session on Thursday.

The 43-run entertaining partnership between Sammy (15) and Samuels was ended by Ishant, giving him his 100th Test wicket.

The Windies' skipper got stuck on the crease on a delivery angling in, which hit his pads and was good enough for umpire Ian Gould to adjudge him out lbw.

In the morning, West Indies lost the crucial wicket of Shivnarine Chanderpaul, which dented their chances of taking a first innings lead.

Abhimanyu Mithun got India the all important wicket when a misjudgement in length induced a false pull shot from the West Indian veteran, who played it onto his stumps to be dismissed for a patient 37.

The wicket of Chanderpaul also broke the crucial 77-run partnership for the sixth wicket after the West Indies were reduced to 57/5 on day two.

Samuels and Baugh were at the crease, with West Indies 138/6 at lunch, still 63 runs behind India after adding 40 runs from 19.3 overs possible in the morning session.

In the early exchanges on day three, West Indies' overnight not-out pair of Chanderpaul and Samuels showed steely resolve under testing conditions on an overcast Thursday morning to keep Indian bowlers at bay.

Ishant steamed in and his new-ball partner Praveen Kumar showed his characteristic energy but the unruffled pair were determined to hang around at the crease.

Runs were difficult to come by and Chanderpaul had a few anxious moments against rising deliveries of Ishant but there were no undue alarms for the hosts.

Sharma bowled seven overs on the trot and gave away 18 runs before being replaced by Mithun at the far end, 15 minutes before the lunch break.

Harbhajan was brought in to bowl in the 47th over, the first genuine spell for the off-spinner, who promptly bowled a maiden to Chanderpaul.

Play started after a one-hour rain delay in the morning as West Indies looked to continue their fightback following a disastrous start to their first innings.