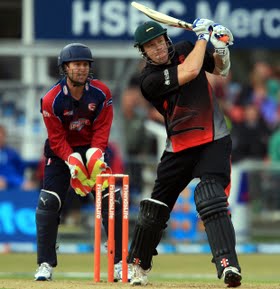 There was a moment during a rain break in this game when Rob Key, the Kent captain, was spotted on the pavilion enjoying a crafty cigarette.

While that might not be the sort of behaviour expected of a professional athlete in this day and age, it's not hard to see why Key might be driven to nicotine. Or, indeed, something far stronger. For, so maddening must it be trying to captain this Kent team, that a weaker man might be reduced to hawking his club car on the way home in return for some mind-numbing release.

Kent should have strolled to victory in this game. Having scored 203 - their highest total of the season and their third highest in the nine-year history of this competition - they produced a remarkably inept performance with the ball to allow Leicestershire back into a game that was as high on entertainment value as it was, at times, low on quality. The bowling of both sides really was remarkably poor.

Crucially, Kent produced 11 wides - nine contributed by their two overseas players - and a diet of long-hops and half-volleys that gave Key no chance of setting an effective field. At one stage WahabRiaz delivered four wides in five deliveries as the basics of the game deserted professionals who really should be able to produce better.

There are some mitigating circumstances. This Grace Road pitch was superb - perfect for T20 cricket - and rain showers left the ball hard to control. But a Kent attack containing four international bowlers should have done better.

"I don't know [what went wrong]," Key admitted afterwards. "But we didn't bowl well enough. We never thought they would get close, but we didn't do well enough. I'm very, very disappointed."

Of course Leicestershire deserve credit, too. It might be expected that a side with their dismal record in the Championship this season - and it really is very dismal - might have lacked the confidence to chase such a target.

Instead, however, they produced a fine team performance with the bat, each man contributing selflessly in the pursuit. The end result was their highest successful run chase in the history of T20 and their third highest score.

It was hard not to be pleased for them as a pitch invasion greeted the moment of victory. This is a club that has been starved of success since the early days of this competition, when Leicestershire appeared at the first four finals days and won two of the first four events.

Grace Road had not seen a crowd of this size since 2006 - the last time they won the T20 - and the prospect of finals day at Edgbaston and, perhaps, a Champions League appearance, is a welcome oasis in the wilderness they've been travelling in recent years.

Right in the middle of the throng at the end was Paul Nixon. Nixon, with 31 from 17 balls, played a significant role in the run chase and now has the chance to end his tremendous career in the style he deserves. The 40-year-old, who made his debut way back in 1989 - before his team-mate James Taylor was even born - was making his last appearance in a competitive game at Grace Road before retirement. He is, however, scheduled to play in the T20 tour game against India.

And, if there was an element of sentiment in the decision to name him man of the match, few would resent it. Or the adulation he received as delighted Leicestershire supporters lifted him upon their shoulders in celebration.

A Leicestershire win appeared most unlikely at the halfway stage of the game. Martin van Jaarsveld and AzharMahmood thrashed 130 in just 63 balls - a third wicket record for the county - as Kent plundered 120 from the final nine overs of their innings and 73 from the last five. It was superb batting.

Van Jaarsveld (63 from just 32 balls) treated the regular long-hops he received with murderous contempt, while Mahmood (91 from 52) struck four straight sixes and hit the ball delightfully cleanly. All Leicestershire's bowlers suffered, with even Claude Henderson, normally a paragon of control, dragging the ball down and offering a number of long-hops.

But it didn't matter. Leicestershire started at a blistering pace, with Josh Cobb - afterwards praised by his captain as "as clean a hitter of the ball as anyone in the world" - and Andrew McDonlad feasting on some fearful rubbish from Mahmood and the deeply underwhelmingCharlLangeveldt.

And even when Leicestershire's openers fell, keeping their side just on top of the D/L chase as rain threatened an early finish, the likes of du Toit, James Taylor and, in particular, Abdul Razzaq (with 27 from 11 balls) all took up where their colleagues stopped. By the time Nixon was dismissed by perhaps the first real yorker of the game, the result was no longer in doubt.

Matt Boyce pushed the first ball he has received in this year's competition to the cover boundary and Leicestershire were victors with four balls to spare.

Afterwards McDonald admitted his side had "escaped" after their "worst performance with the ball" in the season. "We gave away about 20 too many runs," he said. "And we were below par in the field, too. It's something we need to work on, but we always believed we could win it."