Gujarat Lions will look to build on their amazing debut season when they face Rising Pune Supergiants in an IPL clash at the MCA stadium in Pune on Friday.

Gujarat Lions will look to build on their amazing debut season when they face Rising Pune Supergiants in an IPL clash at the MCA stadium in Pune on Friday. The Lions have been in stupendous form, losing only one of the six matches so far -- the latest win against Delhi Daredevils taking them to the top of the points table. Their only loss this season has been a shock upset to Sunrisers Hyderabad. In contrast, the Supergiants have struggled to make an impression after winning their opener against Mumbai Indians. Their run of four losses was halted by a much-needed victory over Sunrisers Hyderabad, but they still have a lot of work to do. 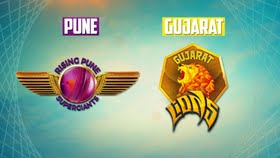 Lions have succeeded in the tournament because of the strength of the players they have in the dugout. The loss of in-form opener Aaron Finch, who got three fifties in the first three games, was a massive setback for the Lions. But, Dwayne Smith replaced him seamlessly at the top against Delhi Daredevils, blasting a quick 50. The match against Delhi also witnessed the return to form of Brendon McCullum, who also blazed his way to a half-century. While Lions would be elated with the form the openers demonstrated against Delhi, they would be expecting more out of skipper Suresh Raina as well as all-rounders Dwayne Bravo and Ravindra Jadeja.

Lions were lucky to survive Chris Morris' spectacular assault on them in the last game. At the same time, credit must be given to Praveen Kumar for the manner in which he kept his calm under pressure. Had it not been for him, the result of the contest could have been the opposite. Bravo went for a lot of runs, but when it mattered, he defended the runs in the last over. Dhawal Kulkarni also finished with exceptional figures of 3 for 19, but the team will expect more out of the versatile James Faulkner.

As mentioned earlier, Pune will have a massive task when they face the Lions. They will be thus happy that they are going into the clash on a winning note. The selection of Ashok Dinda for the Sunrisers match did not seem like a highly inspired move, but it worked wonders as Dinda dismissed the dangerous David Warner in the first over, and went on to add a couple of more crucial wickets. In the batting, there is definitely good news for them. Both the openers Ajinkya Rahane and Faf du Plessis are in impressive form, and are top-scorers for the team.

There are definitely more than a few worries for Pune though. Steven Smith and MS Dhoni, two of the big names in the batting, haven't t come to the party. In the bowling, Murugan Ashwin and Thisara Perera have done reasonably well. Ravichandran Ashwin also held his own in the last game. But, more will definitely be expected of India's premier spinner.