In a high-scoring encounter, England held on to compile a five-run victory in the one-off T20 against Australia at Cardiff. Batting first, England put up an impressive 182 for 5 courtesy 70s from skipper Eoin Morgan and the ever improving all-rounder Moeen Ali.

In a high-scoring encounter, England held on to compile a five-run victory in the one-off T20 against Australia at Cardiff. Batting first, England put up an impressive 182 for 5 courtesy 70s from skipper Eoin Morgan and the ever improving all-rounder Moeen Ali. In response, Australia seemed in control as their skipper Steven Smith made 90, and featured in an excellent partnership with Glenn Maxwell. But, England fought back courtesy a superb catch from Ben Stokes and a wonderful last over from the same man. The performance was another proof of England's improving show in the shorter formats.

At one stage during the chase, Australia seemed in complete control. Maxwell and Smith had added over 100. The former, continuing his attacking instincts, tried to dispatch a long hop from Moeen over mid-wicket. He almost succeeded, but Stokes ran in hard from long on, and took a memorable diving catch. Mitchell Marsh's poor days with the bat continued for Australia. England debutant Reece Topley sent him back with a well-disguised slower ball. Smith followed him soon failing to clear the field. The pressure got to Australia. They needed 12 off the final over bowled by Stokes, but only managed six. The last five Aussie wickets went for 16 runs. 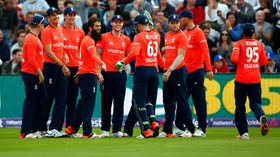 Earlier, England's batsmen also came to the party, Morgan and Moeen in particular. The two Ms added 135 in 12.2 overs to help England recover from a slow start, and put them in a very good position. Moeen was the more elegant of the two, driving the ball with ease, and finding the boundaries without much effort. Morgan's effort, on the other hand, was a typical T20 knock as he clubbed the bowlers during his dashing innings of 74 from 39 balls a knock which featured three fours and seven sixes. He went down the track to Shane Watson, and hit him over the head for six. There were three more in the bowler's next over as England got going.

At the other end, Moeen took a liking to Cameron Boyce. He repeatedly hit him for boundaries. Moeen also greeted Marcus Stonis to the crease with a boundary as 13 came off his first over. Even when Pat Cummins was reintroduced into the attack, the runs kept flowing with ease. A couple of more sixes were added to the innings before the England skipper's enterprising knock came to an end. England were not done though. With nothing to lose, Jos Buttler came in and smashed 11 in 4. At one stage, they would have harboured hopes of 200, but 182 was highly acceptable as well, especially after the poor start they got.

Australia needed a rollicking start, but it wasn't to be. David Warner, not for the first time, was caught at third-man as he tried to punch one, but only managed to give a simple catch. Watson, once again, fell in an innocuous manner. A defensive shot was heading back to the stumps, and as even as Watson had the presence of mind to try and kick the ball away, his football skills deserted him. Smith, however, was in complete control of his innings. He hit seven fours and four sixes in a 53-ball 90. At the other end, Maxwell eased his way to 44 from 30. But, one brilliant catch, brought England back, and they strangled the Aussies from there.