It was seriously a boring match at the Rajiv Gandhi International Stadium in Hyderabad with the batsmen on both the sides struggling to time their shots but the result was a surprise with a fancy batting line-up like the Pune Warriors going down against an unsung Sunrisers Hyderabad.

It was seriously a boring match at the Rajiv Gandhi International Stadium in Hyderabad with the batsmen on both the sides struggling to time their shots but the result was a surprise with a fancy batting line-up like the Pune Warriors going down against an unsung Sunrisers Hyderabad. And this was despite chasing a below par target of 127!

Pune Warriors started off too slowly with the opening pair of Robin Uthappa and Manish Pandey seeing off the early threat from the potent fast bowling duo of Dale Steyn and Ishant Sharma. Everything looked alright until Pune started to lose wickets and at 50 for 4 in the 12th over, the match was wide open. Samuels and Yuvraj failed big time to bring Sunrisers back in the contest. Another big gun Ross Taylor was still there though and all the hopes were on him but the big hitter missed a slower full ball from Ashish Reddy to get bowled and leave his side at 86 for 6. 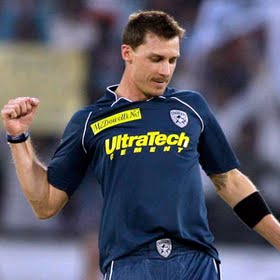 None of the Warriors’ batsmen could strike the boundaries and towards the end, Sunrisers had saved Steyn for a couple of overs. The last over of Steyn ended the match with the fiery fast bowler taking three wickets in five balls to help the hosts to demolish Pune Warriors for 104 in 18.5 overs. Pune Warriors’ Captain Angelo Mathews so easily could have won the match on his own but was left stranded with the last three wickets falling in no time to Steyn.

Amit Mishra did a great job for the homeside taking 3 for 19 in his 4 overs. Thisara Perera took 2 for 29 while Ishant bowled well giving away only 22 off his 4 overs. Steyn lived to his reputation to take 3 wickets for just the 11 runs in 3.5 overs! However, it was Amit Mishra who edged him out to get the Man of the Match for taking the wickets of three proper batsmen.

Sunrisers struggle to post 126: Sunrisers Hyderabad made their IPL debut with a tame batting show against Pune Warriors. The Hyderabad team struggled to get going at any point of time in its innings to score only 126 for 6 in 20 overs. The team lacked any world class big hitters in its line up and the best it could serve to the spectators was an 18-ball 30 from Thisara Perera who got the crowd to its feet with an almighty six over long on off Marlon Samuels.

The start was a modest one for Sunrisers with the opening batsmen – Parthiv Patel (19 from 18 balls) and Akshath Reddy (27 from 30 balls) consuming too many balls and not able to get the boundaries coming. Skipper Kumar Sangakkara and Cameron White, the two big names in the team flopped in repairing the situation and the Pune Warriors finished their job perfectly to contain the Sunrisers to a modest total.

Bhuvneshwar Kumar was the pick of the bowlers with 1 for 17 in 4 overs. Rahul Sharma stifled the scoring with his leg break which went for just 21 in 4 overs.

Toss and Teams: Pune Warriors have won the toss and have asked hosts Sunrisers Hyderabad to bat first at the Rajiv Gandhi International Stadium. Sunrisers are the newest teams in the IPL having replaced the now defunct Deccan Chargers. Interestingly, it was two Sri Lankans turning up for the toss with Angelo Mathews representing Pune Warriors and Kumar Sangakkara coming in for Sunrisers Hyderabad.

The four overseas players for Sunrisers are Sangakkara, Thisara Perera, White and Steyn. For Pune, the overseas players in the XI are Angelo Mathews, Samuels, Mitchell Marsh and Ross Taylor.