Chasing a competitive score of 251, West Indies lost the in-form opener Lendl Simmons for 6 in 16 balls early when he slashed at a wide one to be caught at the deep third man off the the bowling of Vinay Kumar.

Chasing a competitive score of 251, West Indies lost the in-form opener Lendl Simmons for 6 in 16 balls early when he slashed at a wide one to be caught at the deep third man off the the bowling of Vinay Kumar. 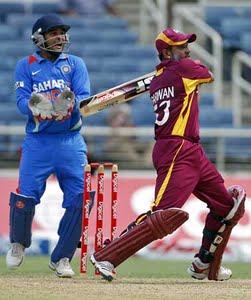 The hosts lost their second wicket when Adrian Barath (17 off 46 balls) went across the line to be adjudged leg before wicket to Amit Mishra as India tightened the screws.

Ramnaresh Sarwan was then joined by the stylish Darren Bravo as the duo shared a brilliant stand of 103 runs before Sarwan was forced to retire hurt because of cramps.

A swashbuckling knock of 86 from 99 balls by Darren Bravo and a solid innings of 75 from 94 balls (retired hurt) by Ramnaresh Sarwan helped West Indies register an emphatic seven wicket victory over India in the fifth and the final ODI at the Sabina Park on Thursday.

The Batting Powerplay proved to be the turning point for Windies as Indian bowlers gave away 57 runs between overs 43 and 47. When Bravo was finally out in the 46th over with 39 still to get, Kieron Pollard and Marlon Samuels plundered 42 runs in only 3.3 overs to seal the issue.

Rohit Sharma was bowled by Anthony Martin and Yusuf Pathan followed suit a India lost their seventh wicket in the fifth and last ODI against the West Indies at Sabina Park on Thursday.

Earlier, the needless run out of Virat Kohli and an irresponsible shot by India's skipper Suresh Raina allowed the West Indies to come back into the match.

Kohli scored a sparkling fifty off just 64 balls and was well supported by Sharma's steady knock as the duo put India in a commanding position.

Put into bat by West Indies, India got off to a worst possible start as they lost both openers early. First one to go was Parthiv Patel when he mistimed the pull shot and was spectacularly caught by Windies leg spinner Anthony Martin off Andre Russell. Patel scored just 6 from 11 balls.

India lost their second wicket when Shikhar Dhawan failed to deal with a rising delivery from Windies paceman Kemar Roach to give Ramnaresh Sarwan a straightforward catch in the slips in the fifth and final ODI at Sabina Park on Thursday.

On probably the fastest pitch to be played on in the series, West Indies skipper Darren Sammy won the toss and chose to bowl first.

After losing the last ODI encounter Team India made a couple of changes with opener Shikhar Dhawan replacing Subramanian Badrinath and R Vinay Kumar also featuring in the starting eleven.