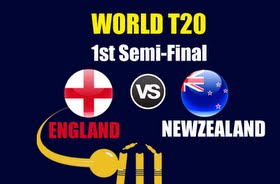 Man of the Match is Jason Roy

England win by seven wickets and are in the final of the World T20. It has been a magnificent performance from the mid-point when they started to strangle the New Zealand innings. Jason Roy then led off the chase in style and, despite two wickets in two balls, it was completed without much fuss at all. It all means we will have a repeat winner of the World T20 for the first time, but will it be India or West Indies to face England in Kolkata?

Martin Guptill returns for Henry Nichols are being rested against Bangladesh and Adam Milne replaces Nathan McCullum. England, as expected, are unchanged.

If Kane Williamson scores 65 today, he will equal Brendon McCullum as the fastest New Zealander to get to 1000 runs...even then Kane is so underestimated in t20 internationals.