Indian pace spearhead Ishant Sharma is set to play the final Test against the West Indies here on Wednesday despite carrying the after effects of a collision with teammate Praveen Kumar on his face. 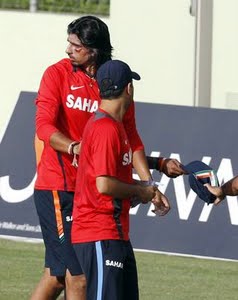 Indian pace spearhead Ishant Sharma is set to play the final Test against the West Indies here on Wednesday despite carrying the after effects of a collision with teammate Praveen Kumar on his face.

Ishant largely stood aside during the only practice session ahead of the decisive Test at Windsor Park on Tuesday, giving rise to speculation that he may not be fit enough to bowl.

That speculation was soon put to rest when Ishant sent down deliveries at full tilt to Rahul Dravid in the nets.

Ishant was hit below his left eye by a leaping Praveen in a football session on Monday. It left a deep bruise around his eye.

Ishant carried a band-aid over his injury during the session but there is no worry on him missing out the final Test.

Meanwhile, it almost looked certain that Murali Vijay and Virat Kohli, two young Indian batsmen who have been unsuccessful in the two Tests, would get another extension in the final game.

Parthiv Patel and Subramaniam Badrinath, two options considered in place of Vijay and Kohli by experts, didn't even get to bat in the net session, putting an end to all speculation on their inclusion.

Munaf Patel, who missed the first two Tests due to an elbow injury, bowled at full tilt at batsmen and is favourite to replace Abhimanyu Mithun in the playing eleven.

India are likely to go in with three seamers and a spinner for the Test. India are presently leading 1-0 in the three-Test series.