In spite of the fact that South Africa hold the record for chasing the highest total in one-dayers, they still cannot be considered as great chasers.

In spite of the fact that South Africa hold the record for chasing the highest total in one-dayers, they still cannot be considered as great chasers. This has been proved time and again over the years, and the Indore one-dayer was the latest example of the same. Just as India should have won the first match at Kanpur, the Indore ODI was South Africa's to lose. And, they managed to contrive a loss out of nowhere, courtesy some poor batting, and that mandatory one poor decision that you get in India. The victory enabled India to maintain their unbeaten record at the Holkar stadium. They weren't at their best on Wednesday as well, but the triumph should give them confidence. 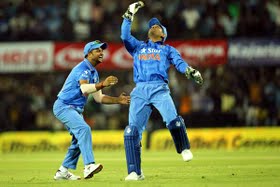 Looking back at the chase, the two wickets picked up Axar Patel in quick succession proved to be a major turning point. South Africa were cruising when JP Duminy missed a sweep and was trapped lbw. With Duminy gone, it was essential for Faf du Plessis to stay on, but he played a very poor shot to be dismissed immediately after. He had just crossed his half-century, and seemed to be relaxing a bit, but India pounced on the opportunity to get back into the game. Although the target wasn't a big one, someone needed to bat through like MS Dhoni did for India. Du Plessis looked like the man, but his dismissal exposed the struggling David Miller, and put India in front.

South Africa's shot selection on the day left a lot to be desired. More than one batsman went out playing soft strokes. The target wasn't a big one, but it was a middling score which meant South Africa could not shut out the run rate completely from the equation. They were possibly in two minds how to approach the target, and this is where some panic set in. Skipper AB de Villiers was bound to register a failure somewhere. It came in this match, and the Proteas could not recover from that jolt. The fact that their lower order is no longer strong on batting did not aid their cause. Although Kagiso Rabada tried, the visitors did not have enough left in the tank.

Axar's performance was clearly the one that brought India back in the match. The left-arm spinner was under pressure to perform having failed to impress in the recent matches. He was also under the spotlight as he was chosen in the playing eleven ahead of the experienced Amit Mishra, who is also the in-form spinner. Another poor showing and question marks would without doubt have been raised about his spot in the team, especially since he hadn't been faring too well with the bat as well. Harbhajan Singh had a reasonable game, but he was lucky to get two scalps. Among the pacers, Umesh Yadav clearly needs to work on his economy rate and consistency.

India's batting effort at Indore must worry them. They had a great opportunity to put up a good score, but failed. Shikhar Dhawan hasn't crossed 50 in the series yet, which isn't good news. Virat Kohli had another poor day with the bat, and Suresh Raina's short ball wounds have been reopened. Under the circumstances, Indian skipper Dhoni, who was under pressure to reassert his place in the side, came up with a typical game-changing innings. His knock not only rescued India, but gave the bowlers a chance to make a match out for it. Credit to Dhoni, and the bowlers for pulling off a hard-fought victory.