The familiar figures of Rahul Dravid and Vangipurappu Laxman guided India to safety and toward a position to push for an unlikely victory in the second test against West Indies in Barbados on Friday.

The familiar figures of Rahul Dravid and Vangipurappu Laxman guided India to safety and toward a position to push for an unlikely victory in the second test against West Indies in Barbados on Friday. 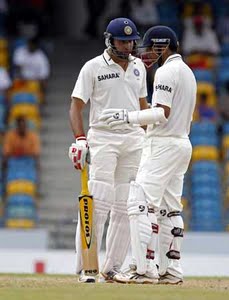 The duo, who often torment teams with long and stubborn innings, both completed half-centuries to steer India to a commanding position of 229 for three in their second innings at stumps on the fourth day at Kensington Oval.

That gave the tourists an overall lead of 240 with seven wickets in hand and only one day remaining in a low-scoring match that has been interrupted by torrential rain but may yet produce a result.

"They're 1-0 up so you might say they don't have to chase the game so we have to hope to bowl them out and see if there's a possibility of a run chase," West Indies coach Ottis Gibson told a news conference.

"We just have to be very positive and try and win the test match. At this stage, we're still hopeful that we can bowl them out."

While a draw still looms as the most likely result, India at least appeared to be out of any danger and building toward a position where they could set up an early declaration on the final day.

"They might think they have enough now but we have to think and assume that our batsmen can chase it down."

Laxman, who top-scored with 85 in the first innings, finished the day unbeaten on 72 with Virat Kohli on 26. The pair added 75 for the unbroken fourth wicket without taking any risks or trying to increase the run-rate.

Laxman had also shared a 65-run stand with Dravid, who made 55, after his patient hundred in last week's first test in Jamaica gave India their series lead.

Dravid also batted cautiously after surviving a let-off on nine when he spooned a catch to Adrian Barath at midwicket, the fielder tumbling sideways to claim a low catch.

Dravid stood his ground after Barath told the umpires he was not certain if he had caught it before the ball touched the grass and the slow-motion video replays proved inconclusive, ensuring the batsman was given the benefit of the doubt.

"Dravid is a very fair player. I'm sure if Adrian said he was convinced he caught it, he would have taken his word ... the right decision was made in the end," Gibson said.

India started the day on 23 for no wicket, adding 206 runs, for the loss of a wicket in each session as the West Indian paceman toiled hard on a lively pitch still full of pace and bounce.

Opener Murali Vijay departed early for three when he feathered a catch to wicketkeeper Carlton Baugh off paceman Ravi Rampaul, then Abhinav Mukund went for 48 after lunch when he gloved a catch behind off a bouncer from Fidel Edwards after being struck in the head by the same bowler.

"Any human being who is out there will tell you, when you come back your body tells you are at war, it's a state of shock," said Mukund, playing in just his second test.

"But I wanted to convince myself that I can face fast bowling. Being hit happens in test cricket.

"It's been really tough, bounce is really steep, it's been a good test for me in the West Indies."