Chris Tremlett marked his return to the Rose Bowl with a Test-best haul to leave Sri Lanka on 177 for nine when rain forced an early close to the second day of the third and final Test here on Friday.

Chris Tremlett marked his return to the Rose Bowl with a Test-best haul to leave Sri Lanka on 177 for nine when rain forced an early close to the second day of the third and final Test here on Friday. 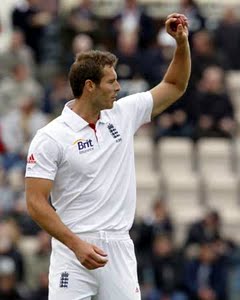 Fast bowler Tremlett took six for 42, surpassing his five for 87 against Australia in Perth in December -- a match that marked his return to Test duty following a three-year absence since his debut in 2007.

The 29-year-old giant quick ripped through Sri Lanka's middle and lower order with four wickets for 16 runs in 32 balls here on Friday.

Nevertheless Sri Lanka's total represented a revival from the depths of 39 for four.

Dilhara Fernando was 33 not out and Chanaka Welegedara seven not out when the players came off the field in a debut Test at the Rose Bowl that has been plagued by bad weather -- of the 180 overs scheduled for the first two days, only 61.2 have been bowled.

Tremlett, who made his name at the Rose Bowl with southern county Hampshire before moving to Surrey last season, had helped bowl England to an innings and 14-run first Test win in Cardiff before the drawn second Test at Lord's.

He's already exploited the assistance offered by a green-tinged pitch to take two for 17 in 11 overs on Thursday before Thilan Samaraweera and Prasanna Jayawardene kept England at bay.

But, after rain meant no play before lunch Friday, Samaraweera could added seven to his overnight 24 before he was dismissed in Tremlett's first over of the day.

The 6ft 7in quick struck Samaraweera a painful blow on the glove with his second ball Friday and, four deliveries later, induced a loose drive straight to Kevin Pietersen in the gully to end a stand worth exactly fifty.

Tremlett then had recalled all-rounder Thisara Perera out edging an intended pull to wicketkeeper Matt Prior.

Sri Lanka were now 91 for six, with Tremlett having taken two wickets for two runs in seven balls.

Tremlett had his five-wicket haul when Rangana Herath top-edged a pull to James Anderson at fine leg to leave Sri Lanka floundering at 117 for seven.

But, after Tremlett's spell of three for 18 in six overs, Stuart Broad was unable to follow-up, the seam-bowling all-rounder too often harmlessly short.

Prasanna Jayawardene, who made a century in the first Test, repelled England's attack with several stylish shots on his way to 43.

Prasanna Jayawardene, in for nearly three hours, helped Fernando add 41 for the eighth wicket -- runs that could yet prove valuable -- before Tremlett's first ball back saw Suranga Lakmal caught behind for a duck.