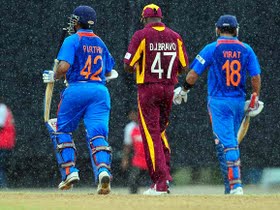 The West Indies had scored 240/9 in their 50 overs with Lendl Simmons (53) and Ramnaresh Sarwan (56) scoring fifties before Misra trigerred a middle-order collapse with his 4-31.

The tourist, however, had an early setback when they lost opener Shikher Dhawan (3) early in the third over but man of the match Kohli smashed six fours and a six in his 103 balls and Patel played a blistering knock off 64 deliveries to put India back on track.

Rain halted India's march for 80 minutes but the visitors were never in a spot of bother with skipper Suresh Raina (26 not out) hitting the winning runs for India.

Put to bat, the West Indies had looked set for a 250 plus total when they were 192 for three at the end of the 41st over and a set Ramesh Sarwan at the crease.

But that was when the script went awry as four batsmen, including Sarwan, fell within five runs and the home team was left struggling at 197/7 with 38 balls remaining.

Mishra did the maximum damage for India, Captain Darren Sammy (22), along with Ravi Rampaul (14), added 31 valuable runs towards the end and lent respectability to the final score.

The hosts were off to a solid start with Simmons and Kirk Edwards (25) forging a 57-run opening stand. After Edwards was caught behind off Mishra, Simmons and Sarwan added another 67 runs.