No Review System in India vs West Indies Test series 2011

The controversial Umpire Decision Review System will not be in place in the forthcoming series between India and the West Indies after the BCCI has convinced its Caribbean counterparts against the use of technology during the entire tour.

The controversial Umpire Decision Review System will not be in place in the forthcoming series between India and the West Indies after the BCCI has convinced its Caribbean counterparts against the use of technology during the entire tour.

The implementation of UDRS in a bilateral series is the prerogative of the home board but the powerful BCCI, who has opposed the system from the onset, has forced the West Indies Cricket Board (WICB) to do away with it in the series, which starts with a T20 International here on Saturday. 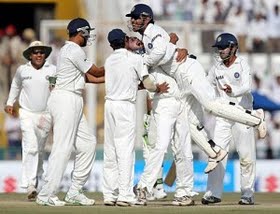 A WICB spokesperson confirmed that UDRS will not be used in the one-off Twenty20 match, five ODIs or for that matter in the three upcoming Test matches.

Incidentally, UDRS was used when Pakistan toured the Caribbean recently.

India has been a staunch critic of UDRS ever since Sachin Tendulkar went public with his disapproval of the system in Sri Lanka a couple of years ago.

Just before the World Cup, Indian skipper Mahendra Singh Dhoni too gave his thumbs down to the system.

"I don't support the UDRS as you have two gentlemen standing as umpires on the field, who are professionals. They also have the support of the third umpire. Referral system, I personally believe is not a cent per cent thing. I am not going to buy a life jacket that doesn't come with a warranty," he had said.

The last straw for India, perhaps, was the World Cup league match against England in Ahmedabad.

In the 25th over of the England innings, Dhoni sought the help of UDRS when on-field umpire turned down a lbw appeal against Ian Bell off Yuvraj Singh.

The technology clearly showed that Bell was out as the ball was going to hit the middle stump, yet, strangely, the third umpire ruled in favour of the batsman because the distance between the wicket and point of impact was more than 2.5 metres.