Southampton T20: Sri Lanka again failed to put up runs on the board

As mentioned in the preview the T20 game provided Sri Lanka with their best opportunity to claim a win on a long and luckless England tour. Unfortunately, it wasn't to be as their batting again crumbled

As mentioned in the preview the T20 game provided Sri Lanka with their best opportunity to claim a win on a long and luckless England tour. Unfortunately, it wasn't to be as their batting again crumbled, and they did not put up enough runs on the board, even though Angelo Mathews won the toss and decided to bat first. Their batsmen failed to make use of the opportunity, and only managed a mediocre total. It was an opportunity lost as Sri Lanka's best chance of pushing for a victory was gone. Their bowlers were always going to struggle to defend a low total, and that was how it proved to be. To their credit, England did not take things lightly, and eased their way to another win.

The match was pretty much decided in the first half of the game as Sri Lanka stumbled. Debutant Liam Dawson's three-wicket burst swiftly put the match in England's favour, and all hopes of a fight from Sri Lanka had evaporated. Dawson's scalps were crucial as it scuttled a good start from the visitors. After losing Kusal Perera early, Danushka Gunathilaka and Kusal Mendis had taken the team past the 50 mark at a decent rate. But, just as Sri Lanka were looking to up the rate, Dawson sent both of them back, in their 20s. The double strike meant all the momentum Lanka had gained was snatched away.

Dawson though wasn't done. He was soon to add the biggest scalp of all, opposition skipper Angelo Mathews to his kitty. As a result of Dawson's brilliance, the Lankans crumbled from 58 for 1 to 81 for 4. They kicked themselves in the foot when Dasun Shanaka was run out in embarrassing fashion, as half the side was back in the hut before Lanka could even get close to 100. After Dawson was done, Chris Jordan also shone. He picked up another key wicket of Dinesh Chandimal, before packing up the tail. Liam Plunkett got the early breakthrough while Adil Rashid kept things tight. Tymal Mills did not pick up any wickets, but he was pacy for sure.

England's batting once again stood up for the team. Jason Roy bubbling with exuberance following the twin hundreds in the one-dayers got overconfident, and gave his wicket away. But, Jos Buttler, who got the opportunity to open in place of the rested Alex Hales, grabbed his golden chance with both hands and pulverized the bowling to shut Sri Lanka out of the contest completely. The brutal nature of the innings may force England to think on the lines of playing him as opener in future games. James Vince played a good supporting hands, while skipper Eoin Morgan contributed 47 not out in spite of dislocating a finger while fielding. 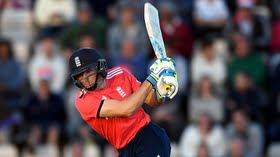 For Sri Lanka, it was again a sense of déjà vu all over again. The story of the tour repeated itself in the final match as well. A number of their batsmen got starts, but none carried on. When it was their turn to bowl, they got the early strikes, but could not build on them. In contrast, England continued to remain impressive. The experienced players put their hands up while the newcomers shone with confidence. The wide gulf that was evident in the Tests and ODIs could not be bridged in the T20 as well. And, that would have disappointed Sri Lanka most.