Mohammad Hafeez has won it again and Pakistan are bowling once again, an expected decision given the dew later in the evening. Pakistan are playing an unchanged team.

MS Dhoni said India would have bowled as well, but hopes the 5pm start will reduce the amount of game time played in dewy conditions. India have made one change - Ravindra Jadeja is out and in comes the offspinner R Ashwin. So India are playing four specialist bowlers. 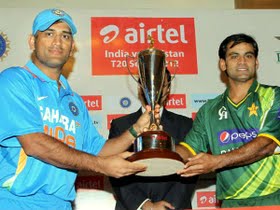 • Shahid Afridi is the only player in Twenty20 internationals who has scored 800-plus runs, took 20-plus wickets and held 15 catches.

Pakistan skipper Mohammed Hafeez said, "We have the opportunity to win the series. We are all ready for this. Not just tomorrow's match, we are positive about the entire series. We are united (as a team) in this series and we want to play good cricket,"