India reduced West Indies to 82/5 on day two of the second Test at the Kensington Oval on Wednesday. Shivnarine Chanderpaul (12) and Marlon Samuels (15) were at the crease at lunch.

Rain played spoilsport on day two of the second Test between West Indies and India as only 25.3 overs were bowled throughout the day at the Kensington Oval on Wednesday. 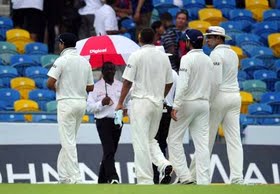 When play was finally abandoned for the rest of the day, West Indies were 98/5 - still trailing India by 103 runs - with Shivnarine Chanderpaul (20) and Marlon Samuels (21) at the crease.

Ishant Sharma gave India the sort of start the visitors were looking for at the beginning of second day's play as the Indian speedster got the wickets of the two overnight not out batsmen - Devendra Bishoo and Ramnaresh Sarwan - at the Kensington Oval on Wednesday.

Both the batsmen got out in one over of Sharma. Bishoo (13), clearly perturbed by the pace and bounce of the lanky pacer, couldn't hold onto a rising delivery and was caught in the gully by Kohli.

Sharma struck again on the last ball of his over when he trapped Sarwan (18) in front for the second time in the series.

Sharma got the reward for the consistent line and length he maintained throughout the morning session. Praveen Kumar, who was equally impressive with his swing, could have also registered a few wickets to his name had the ball touched the batsmen's bat on every play and miss.

After a see-saw battle on the opening day of the second Test, when 13 wickets fell, it would be a day of survival for the West Indies while India would like to take the initiative by taking more Windies' wickets at the lively wicket of the Kensington Oval.

At the close of play on day one, Ramnaresh Sarwan was batting on 10, while night-watchman Devendra Bishoo joined him to face the last delivery of Abhimanyu Mithun

Indian wickets fell like ninepins after tea and their first innings was wrapped up for 201 by some consistent bowling by Fidel Edwards and Devendra Bishoo during the last session.

VVS Laxman and Suresh Raina shared an invaluable 117-run stand for the fifth-wicket and revived the visitors’ innings, which was once tottering at 38/4 in the day’s first session.