When players had made their way onto the field, another drizzle delayed the start of the England innings. More overs can be reduced when play will actually get underway. 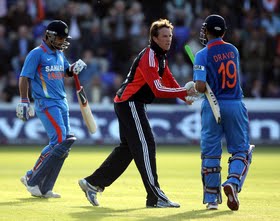 When players had made their way onto the field, another drizzle delayed the start of the England innings. More overs can be reduced when play will actually get underway.

Revised target: A passing shower made umpires reduce the England target from 305 in 50 overs to 270 runs in 40 overs.

End with a flourish:Mahendra Singh Dhoni made full use of the launch pad set by centurion ViratKohli (107 off 93 balls) and RahulDravid (69 off 79 balls) to take India to a massive 304/6 in the fifth ODI against England in Cardiff on Friday.

A cameo by Dhoni: The Indian captain took the attack to the opposition from the word go as he plundered an unbeaten 50 off 26 balls.

Bizarre dismissal: After hitting a magnificent century (107 off 93 balls), Kohli was out hit wicket while trying to flick Graeme Swann.

Dravid's dismissal:Dravid departed after playing another substantial innings (69 off 79 balls). The 38-year-old got a brilliant send-off from the English players as he donned the Indian blue jersey for the last time.

Century for Kohli: The 22-year-old hit eight fours and a six to complete his sixth century in 50-over cricket off 87 deliveries.

Kohli take charge: The Delhi lad hit two fours and six off the left-arm spin of Samit Patel as India reached 216 at the end of 40 overs.

Dravid hits half-century: Playing his last limited-over international game, RahulDravid scored another useful fifty (62 balls). But immediately after completing the landmark, he was dropped on 51 by Jade Dernbach on his own bowling.

100-run stand:Dravid and Kohli completed a 100-run partnership for the third wicket in 112 balls.

Kohli’s fifty: The 22-year-old right-hander played an extremely useful knock and got to his fifty in 54 deliveries. He hit five crisp boundaries in his unbeaten knock.

Over No. 30:Dravid and Kohli further consolidated the Indian innings and took the visitors’ score to 133/2 at the end of 30 overs.

50-run stand:Dravid and Kohli strung an unbeaten 50-run partnership for the third wicket after India lost their second wicket (Parthiv Patel) at 57.

Swann strikes again: Like so many occasions in the past, the England off-spinner gave his side a breakthrough in his first over itself. After Rahane, Parthiv Patel (19 off 39 balls) too got out after getting a start.

Rahane’s dismissal: The 23-year-old batsman did not learn from his earlier mistake and got out (26 off 47 balls) caught at the same position – third-man – where he was dropped earlier. Steven Finn dived forward to take a brilliant catch off the bowling of Jade Dernbach.

Over No. 10: India reached 43/0 at the end of first powerplay. While AjinkyaRahane made full use of the life offered to him by Samit Patel, Parthiv Patel ensured that the strike was rotated regularly.

Drop chance: England’s fast bowler Steven Finn, who bowled with fierce pace throughout his first spell, forced Rahane to play a reckless stroke off a ball outside the off-stump. But Samit Patel dropped a sitter while fielding at third-man. Rahane was batting on 10 then.

Over No. 5: The opening combination of Patel and Rahane got India off to a solid start in the fifth one-day international against England in Cardiff on Friday. Play got underway after a 40-minute rain delay.

Delayed start: England skipper Alastair Cook won the toss and asked India to bat before the rain delayed the start of the last ODI between the two sides.

Team Changes: While the hosts go into the match without James Anderson, Stuart Broad and Ben Stokes, India have brought in Vinay Kumar in place of the injured Praveen Kumar.

Dravid's last game in ODIs: India's last chance to register a win on their catastrophic tour of England coincides with curtains coming down on one half of a celebrated career of RahulDravid, for whom the fifth ODI here on Friday will be the last.