West Indies's win in the last game came a little too late to salvage the series for the hosts, but the win combined with the fact that they have finally been granted the wish of playing the visitors on a bouncy track mean that India will have to put in a solid performance to get back to their winning ways in the fifth ODI

West Indies's win in the last game came a little too late to salvage the series for the hosts, but the win combined with the fact that they have finally been granted the wish of playing the visitors on a bouncy track mean that India will have to put in a solid performance to get back to their winning ways in the fifth ODI here on Thursday and have a measure of the wicket which is likely to be used for the first Test as well. 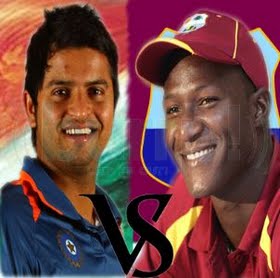 The last time these two teams played on a bouncy track was in Barbados during the T20 World Cup in the Caribbean in 2010 and the West Indies pacers singed the Indians with some superb short-pitch bowling. And even though the legendary Curtly Ambrose believes that the West Indian pacers have lost the art of intimidating the batsmen, the fact that most Indian batsmen are susceptible to the short stuff is no secret.

Also, India's three wins in the five-match series have come on the back of some consistent performances from some of the players. By no measure has it been a complete team effort. Rohit Sharma has stood out with the bat, while the bowlers have put up a creditable show. In one game where the bowlers and Rohit failed was in the fourth ODI and the result was for everyone to see.

S Badrinath, Manoj Tiwary, Shikhar Dhawan, Yusuf Pathan, Virat Kohli and even stand-in skipper Suresh Raina have played poor shots. While Dhawan and Kohli have played one fifty-plus innings each, the others have struggled with their form and are a pale shadow of the kind of strokeplay they had displayed recently in the IPL. There is no doubt that the IPL has taken a toll on them as well. What is even more disturbing to see is the shot selection. And on some occasions they have just thrown their wickets away.

The bouncy wicket, however, could act like a double-edged sword. While the Windies will no doubt test the Indian batsmen, the Indian bowlers too could make use of the bounce and carry to pay back the Windies in their own coin. Praveen Kumar's spell with the new ball in the fourth ODI was brilliant and if he can bowl a similar opening spell, the hosts will surely be on the backfoot. It has to be seen if the rested Munaf Patel will come back for the final ODI, but the person to watch out for will be Ishant Sharma. The Delhi lad must make use of this track to get his confidence back ahead of the first Test that starts at the same venue on Monday.

Meanwhile, for the Windies a lot depends on how their batsmen cope up with the pressure of putting the runs on the board. Keiron Pollard and Lendl Simmons hold the key for the hosts especially with the middle order looking quite brittle.

But the final game of the ODI series clearly looks like one between the West Indies bowlers and the Indian batsmen. Even though Kemar Roach has not been amongst the wicket-takers, he has bowled quite economically. Also, Andre Russell and Anthony Martin have stood out by using the tracks quite well. West Indies could also consider bringing back Ravi Rampaul or Dwayne Bravo for this game. There's nothing like having a win under your belt before heading into the Test series. This game will determine if the momentum will stay with India or will it shift in favour of the Windies.