Sri Lanka reached 101-0 by tea Saturday on day two of the second Test against England, progressing steadily in reply to England's 486 all out.

Sri Lanka reached 101-0 by tea Saturday on day two of the second Test against England, progressing steadily in reply to England's 486 all out.

After a challenging first few overs from Stuart Broad and Chris Tremlett, captain Tillakaratne Dilshan and fellow opener Tharanga Paranavitana settled on a pitch offering bounce to the pace bowlers but little else. 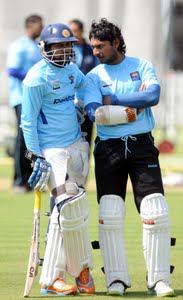 Dilshan scored 54 not out and Paranavitana made an unbeaten 32 in Sri Lanka's highest ever opening partnership at Lord's.

But Sri Lanka has a long way to go after Matthew Prior's fifth test century and Broad's 54 put the home side firmly in control by lunch.

After an innings defeat in Cardiff, Sri Lanka needs to win at Lord's to have any chance of winning the three-Test series.

Having helped England add 144 to its overnight 342-6, Broad beat the bat three times in the first over of Sri Lanka's reply, shaping the ball away from the left-handed Paranavitana. Dilshan, who put England into bat on Friday, then swung and missed at Tremlett's first delivery in the next over.

Alastair Cook, who scored 96 on day one to give England the platform to pass 400 for the fourth straight innings, then dropped Paranavitana when he was on 13.

England's pace bowlers failed to sufficiently control their length to force the breakthrough, with Dilshan punishing bad balls from Tremlett, who conceded 21 runs from his six overs.

Spinner Graeme Swann needed treatment to his wrist, jarring it as he tried to take a catch in the fourth over when Dilshan edged Tremlett just short of the slips, but returned to extract some turn.

Dilshan was more comfortable than his partner against spin, and cracked a shot off Swann's fifth ball straight into close fielder Ian Bell. Bell turned and took the blow to his ribs, needing on-field treatment before continuing.

Swann had a couple of lbw calls against Paranavitana just before the interval, but batsmen remained on top, as they had done since the first eight overs Friday — when England collapsed to 22-3.