There was no dearth of excitement on the opening day of the Dominica Test between West Indies and Australia even though only a little over 230 runs were closed on a pitch that proved to be much tougher for batting than expected when Denesh Ramdim decided to take first strike after calling correctly. The Windies batsmen never looked in control out in the middle, and folded up for a meagre 148, with Mitchell Johnson and Josh Hazelwood chipping in with three wickets each, and Mitchell Starc claiming two. In response, Australia had reached 85 by end of day, though they too lost three wickets. 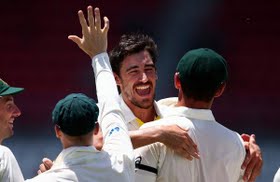 West Indies fought back well with the ball, but the fourth wicket partnership between debutant Adam Voges and the experienced Steven Smith augured well for Australia. Voges, a domestic veteran making his debut at the age of 35, hit four fours in his 20 from 27 balls as Australia got past the halfway mark of Windies' first innings total. Smith, on the other hand, was more watchful, and understandably so. Australia could not afford to lose another wicket by stumps as it would have given the Windies a sniff to make a rollicking comeback. He occupied the crease for 67 balls, and was rewarded with a stubborn 17.

Having dismissed the hosts quickly, Australia would have hoped for a strong start. Instead, David Warner fell for 8, miscuing a rising delivery from Jerome Taylor to point. Shaun Marsh, who got the opportunity to open in the absence of Chris Rogers, also did not utilise the opportunity, and edged Jason Holder to slip when on 19. Skipper Michael Clarke also departed after getting into double figures, edging Devendra Bishoo behind the stumps. Smith and Voges ensured no further trouble for the visitors.

In spite of West Indies' fight back, Australia took the honours for the day. Hazelwood drew first blood for Australia when he got a delivery to move away, and had Kraigg Braithwaite caught behind for 10. Shai Hope looked in decent touch and hit five crisp boundaries. At the other end, Darren Bravo added began confidently. The pair added 40 for the second wicket to put the hosts in a somewhat comfortable position. But, Nathan Lyon did the trick for Australia by having him caught at slip, brilliantly by Clarke, on 19. Hope, the innings' top-scorer, made 36. He drove Johnson, and a thick edge was held nicely by Marsh at gully.

In the post-lunch session, things worsened for the hosts. Three wickets fell in four overs as Shane Dowrich, Jermaine Blackwood and Marlon Samuels were dismissed cheaply. Dowrich made 15 before he dragged one on from Hazelwood while Blackwood edged the same bowler to slip on 2, Clarke the catcher again. Samuels mistimed a hook off Starc, and this time Hazelwood was the catcher at fine leg. Ramdim was bowled by Johnson for 19, by one that kept low, while Holder made 21 before edging Starc to gully. Taylor fell to a long hop from Smith while Shannon Gabriel edged Johnson to slip for 2 to end Windies' misery.