England, desperate to register a win to keep their hopes alive in the series, managed a comprehensive 93-run triumph in the 3rd ODI at Old Trafford, Manchester against Australia

England, desperate to register a win to keep their hopes alive in the series, managed a comprehensive 93-run triumph in the 3rd ODI at Old Trafford, Manchester against Australia, to make it 2-1 in the visitors favour with two games to go. The impressive victory was built around James Taylor's hard-fought maiden hundred, who continued to bat at number three, and repaid the faith the team management placed in him. His hundred led England to 300, a significant score under the conditions. With the ball turning in the second half, Australia's batsmen couldn't withstand the pressure put on them by Moeen Ali and Adil Rashid. Aaron Finch made a fifty on his comeback, but 207 was all Australia managed.

Keeping in mind the conditions, the toss was a crucial one to win for England. But, to utilise the advantage gained, they needed a composed hand out in the middle. And, that is what they got from Taylor. Not known for his big-hitting skills, Taylor played an old-fashioned knock during which he manoeuvred the ball around, and dealt mostly in singles. His calm presence out in the middle ensured England fell comfortable even when the wickets were falling. Taylor found good support from skipper Eoin Morgan as the two added 119 for the third wicket to put the hosts in command. England faltered thereafter, but had enough talent to touch 300. 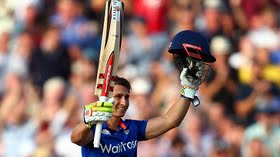 The England innings got off to an impressive start, thanks in main to Jason Ray, who was imperious at the start, and made the Aussie bowlers pay for their poor lines. At one stage, Ray took on Mitchell Starc, and thrashed him for four fours in five overs. Alex Hales however completed a hat-trick of failures. He struggled completely in a 31-ball 9, his contribution in an opening stand of 52. Australia fought back once Morgan was dismissed in the sixties. From 205 for 2, the visitors managed to hold England to 300. And while that was an impressive comeback, it was also a day of missed chances for them. Morgan's stumping off Ashton Agar was missed when on 15 while Taylor survived an lbw appeal on 41 as Australia did not use DRS.

Chasing 301 to win the series, Australia were never in the hunt. Their opening woes were similar to that of England. While Joe Burns was in mini-Hales mode, falling for an ineffective 18-ball 9, Finch was more like Ray. He looked at ease early on, but was the only Aussie who seemed comfortable at the crease. Things got increasingly difficult for the team as the ball got old. Australia struggled because, unlike England, they couldn't piece together a partnership. They particularly struggled due to their failure to break the stranglehold of the two impressive spinners Moeen and Rashid. The former actually finished with his career best ODI figures.

Australia were dealt a big blow when skipper Steven Smith fell for 25, brilliantly caught by Steven Finn, diving full length at midwicket, off Rashid. Finch departed immediately after going past his fifty, holing out in the deep off the same bowler. The middle-order did not offer any resistance. George Bailey struggled to 25 before hitting a full toss from Moeen straight to deep midwicket. Glenn Maxwell came in and displayed a couple of impressive reverse sweeps, but feel in the same fashion to Moeen going for the third one. The in-form Matthew Wade fought hard for his 42, but wickets kept falling at the other end, and it was all too easy for England.