When India take on New Zealand in the opening T20I at Auckland on Friday, it will be the first meeting between the sides since the World Cup 2019 semi-final at Manchester.

When India take on New Zealand in the opening T20I at Auckland on Friday, it will be the first meeting between the sides since the World Cup 2019 semi-final at Manchester. But obviously, views of revenge are being floated around. However, Indian captain Virat Kohli shut all such thoughts, stating that the Kiwis are too ‘nice’ for them to even think about something like that.

Kohli addressed the media prior to the 1st T20I at Eden Park in Auckland and said that avenging the World Cup loss is the last thing on their minds. "Honestly, even if you think about revenge, these guys are so nice, you can't get into that zone. We get along really well with these guys and it's all about just being competitive on the field.

“They are probably one side that has set the right example for teams to play at the international level and how they should carry themselves. They are not nasty and you can tell by the way they play. We have a lot of respect for them and vice-versa. We were actually happy for them when they qualified for the finals because when you have lost you have to look at the larger picture," the Indian captain explained. 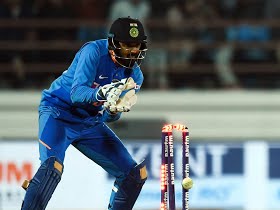 Speaking about opener Shikhar Dhawan’s injury, Kohli asserted that it shouldn't affect the team much as quite a few players are in good form. Dhawan’s absence would mean KL Rahul moving back to the top of the order with Rohit Sharma.

"It (Dhawan's injury) will certainly alter a few plans for us. In the one-day game, I think we'll have to think of sticking to the same as what we did in Rajkot. Have another guy at the top and let KL just express himself at that position where he played really well. In T20 cricket, of course, the dynamics change a little bit more because we do have lower-order batsmen who have done well. So we have a few more options there in terms of solidifying that spot and probably letting Kl bat at the top,” Kohli added.

The Indian captain was also pleased with the fact that the move of Rahul donning the gloves has worked well as it gives them additional flexibility. He also praised Rahul as a total team man. “Him doing really well with the gloves has opened up another scenario for us which gives us a lot more balance in playing an extra batter. If he can keep that well and perform well with the bat then why not.

“This is something that we are looking to continue for a while and nothing to be taken away from anyone else but it's just what brings the best balance to the side. I know there will be a lot of talks around what happens to other players and whatnot. For us, the most important thing is what the team requires and the best balance that we can create as aside,” he went on to explain.

India left for New Zealand immediately after the ODI series against Australia at home got over. Joking about the tight international schedule, he added, "It is definitely getting closer and closer to landing at the stadium straight. That is how compressed the gap has become.”