India last chance to register a win in England tour 2011

India's last chance to register a win on their catastrophic tour of England coincides with curtains coming down on one-half of a celebrated career of Rahul Dravid, for whom the fifth ODI here on Friday will be the last. 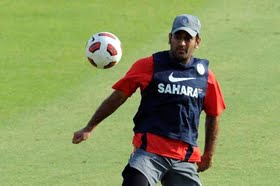 India's last chance to register a win on their catastrophic tour of England coincides with curtains coming down on one-half of a celebrated career of RahulDravid, for whom the fifth ODI here on Friday will be the last.

Expressing surprise to his recall to India's ODI squad after a hiatus of two years, Dravid had announced that the five-match series against England will be his swansong for the limited-overs version of the game.

Sandwiched between the Test debacle and ODI series was another unique for Dravid: a Twenty20 international that witnessed his debut and retirement in the same match. Due to injuries, India were struggling to get seven batsmen together and Dravid answered the call of duty by playing his first and last T20 for India, long after he had decided to leave the format to youngsters.

But Dravid's 344th and last ODI on Friday will be of trivial importance as England have already won the five-match series 2-0, with the first ODI being washed out and the fourth one ending in a D/L-enforced tie.

India came close to winning their first match on tour at Lord’s but skies opened up in the dying stages, with England still needing 11 runs off 7 balls with just two wickets in hand. But with no further play and scores tied as per D/L, the game was declared a tie.

Though a dead rubber, the fifth game promises to be a close contest with India's newfound aggression with young, attacking players like Ajinkya Rahane, Parthiv Patel, R Ashwin and Ravindra Jadeja. And there will be the added incentive for India to go all out for a win as that will help save their No. 4 ODI rank.

This will be one of the rare occasions on tour for MS Dhoni when he will have all players fit and up for selection. But the only likely change expected is that of promising speedster Varun Aaron at the expense of Munaf Patel or RP Singh.

England will be without Stuart Broad who has been ruled out after a shoulder injury sustained in the fourth ODI at Lord's. His place in all likelihood will go to Jade Dernbach who missed out in the last match after being on the expensive side in the series.

It will also be the last chance for India's new coach Duncan Fletcher to leave the England shores with a win. It hasn't been an auspicious beginning to Fletcher's stint, who has failed to strategise a win in England after success against a mediocre West Indies.