The two-day practice match between India and WICB President's XI ended in an expected draw. But, not before the two teams got some useful practice out in the middle. Having declared their innings on 258 for 6 on the opening day,

The two-day practice match between India and WICB President's XI ended in an expected draw. But, not before the two teams got some useful practice out in the middle. Having declared their innings on 258 for 6 on the opening day, the Indians bowlers would have been hoping to make an impression against a line-up consisting of a number of Test hopefuls. But, it was a mixed bag for them. While leggie Amit Mishra made an impact with four scalps, the pace bowlers struggled out in the middle. The batting side took full advantage of the same to score 281 for 7 in 87 overs.

Shai Hope stood out for the West Indies Board President's XI, scoring an unbeaten hundred. He made an impressive 118 from 229 balls, a knock which featured 15 hits to the fence, and was at the crease for 335 minutes, quite a long duration for a two-day game. As mentioned earlier, Mishra was the only bowler who managed to make a serious impression on the opposition batsmen, finishing with figures of 4 for 67, troubling the batsmen with his variations.

The day began under cloudy skies, and Virat Kohli would have hoped for his pace bowlers to make good use of the conditions. But, that wasn't to be the case. Bhuvneshwar Kumar and Mohammed Shami seemed rusty for sure. They actually did not begin badly. Kumar was successful in getting to swing the ball both ways. He was rewarded with the wicket of opposition skipper Leon Johnson. Shami bowled with good pace, and troubled batsmen initially, especially on the line outside the off-stump. However, after the initial spell, they lost their way, and the lack of cricket came to hurt them. The duo started spraying the ball all over the place. 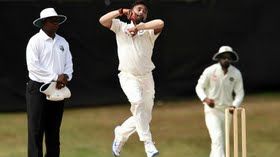 Due to the ineffective bowling, Hope and Rajendra Chandrika took the opportunity to play themselves in. They left the balls outside off-stump, and punished those on the leg. After Shami and Kumar, Kohli then turned to Ishant Sharma and Umesh Yadav. They too were inconsistent though, and could not make much of an impression. It was eventually Mishra, who made it a decent day for India. The batsmen were uncertain against his variations, and Mishra was rewarded for his good bowling with the scalp of Chandrika. After having Chandrika stumped, he did the same to Jermaine Blackwood first ball, leaving him on a hat-trick.

While Mishra failed to get a hat-trick, he did pick up two more scalps while Shami and Yadav helped themselves to one each. The teams will feature in the second warm-up game from July 14 to 16 before the first Test at Antigua on July 21.