The Champions League Twenty20 will kick off with the qualifying game between Ruhunu Eleven and Trinidad and Tobago here on Monday. 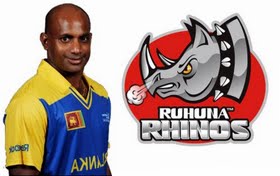 The Champions League Twenty20 will kick off with the qualifying game between Ruhunu Eleven and Trinidad and Tobago here on Monday.

Except Ruhunu and T&T, there are four other teams - Kolkata Knight Riders, Auckland Aces, Leicestershire and Somerset - vying for three vacant spots in the main event of the tournament, which will begin from September 23.

Ruhunu will bank heavily on their powerful batting department led by hard-hitting 42-year-old SanathJayasuriya, who is taking part in the tournament as the oldest player.

Their skipper MahelaUdawatta acknowledges the importance of having Jayasuriya in the side.

"Our strong point is batting. We are lucky to have Jayasuriya in our side. He is such a great player and has so much experience. He will surely provide us with some ideas," Udawatta said ahead of his team's opening match.

Except Jayasuriya and skipper Udawatta, the Sri Lankan side will also hope that young batsman DineshChandimal makes his mark.

He came into reckoning for the national team after a series of brilliant performances in domestic cricket, and his century in the ODIs against England illustrated the talent the 21-year-old possesses.

But what remains a concern for the Sri Lankan side is its bowling, which is fairly inexperienced.

Ruhunu's task is easier said than done as in Trinidad and Tobago they face a highly-motivated side which reached the finals of the same tournament in 2009.

Though they have lost big-hitting Kieron Pollard to Mumbai Indians, the Caribbean side is determined to move on.

"If we can go one step further to what we did in 2009, it would be a great feeling. This is a big stage and we will play as a national team. It is important for us to recognise that and try to give our best," Trinidad and Tobago captain Darren Ganga said.

With the likes of skipper Ganga, his brother Sherwin Ganga, Adrian Barath, Darren Bravo, DeneshRamdin and Lendl Simmons up in their armoury, the Trinidad and Tobabgo outfit has a good mixture of youth and experience.