Dilshan will miss the 3rd Test against England on 16th June 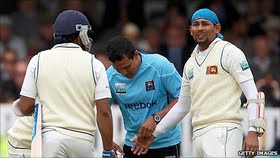 The tourists, who are 1-0 down in the three-match series, will instead be led by former captain Kumar Sangakkara, who stepped down after the World Cup final defeat by India, at the Rose Bowl when the third Test starts on Thursday.

Dilshan had been expected to miss the match after twice being hit on the thumb by Englandfast bowler Chris Tremlett while making 193 -- the highest Test score by a Sri Lankan at Lord's -- in the drawn second Test.

He then sat out the drawn three-day tour match against Essex at Chelmsford and the tourists bowed to the inevitable by ruling out opening batsman Dilshan on Tuesday.

"He definitely won't be playing," Tennekoon said of Dilshan. "The main reason we've kept him out of this Test match is that, had he played and got another blow while fielding on that thumb, he might have been out for the rest of the tour.

"So as a precautionary measure, we have kept him out."

Now the uncapped Lahiru Thirimanne, who made a century against Essex, is set to take Dilshan's place in the team.