India's captain for the limited-overs series on the tour of West Indies - Suresh Raina - on Tuesday said his experience of playing under different captains will help him lead a young Indian side that is keen to do well in India's first series after being crowned as ODI Champions earlier this year.

"Learnt a lot from captains I’ve played under, including (Anil) Kumble, (MS) Dhoni and Rahul Dravid. Tour to the West Indies is very important for young players who are keen to do well," said Raina. 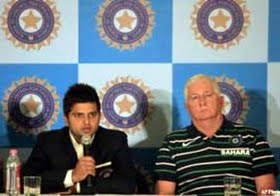 Addressing a press conference before leaving for the Carribbean, the UP batsman said the team was balanced despite the absence of key players. Gautam Gambhir, prolific opener Virender Sehwag, World Cup hero Yuvraj Singh are out with injuries, while regular skipper MS Dhoni, Sachin Tendulkar and Zaheer Khan have been rested.

"We have a good balanced side. Important to stay focused and disciplined for the series," he said, adding, "I am really honoured to be leading the side. I am happy with the side as we have some very good batsmen in Rohit Sharma, Manoj Tiwary, S Badrinath, Shikhar Dhawan all of whom have done well in first-class cricket.

The stand-in Indian skipper, sitting alongside newly-appointed coach Duncan Fletcher, also had a special word of praise for Badrinath.

"Badrinath especially has done well in first-class cricket and deserves to be in the team. I hope we will do well in the West Indies," said Raina who will hand over the reins to Dhoni when he returns for the three-Test series to be held after the conclusion of the five ODIs.

When asked to comment on the West Indies side, Raina said playing in the West Indies was always a challenge, even though Chris Gayle was not picked for the only T20 and the subsequent ODI series.

"West Indies has players like Gayle missing but it will be a challenge for us. We will surely do well."

On being quizzed about his strategy if Gayle returns after the first two ODIs, the southpaw mentioned the name of his Chennai Super Kings and India teammate R Ashwin as a weapon to counter the Gayle threat.

"We have Ashwin. It's a good challenge for us," said Raina.

Indian open their campaign with the only Twenty20 international on June 4, followed by the ODI series that starts from June 6.