A super confident Chennai will take on a struggling Rajasthan in match number 12 of the Indian T20 League 2019 on Sunday at the M.A. Chidambaram Stadium. While Chennai go into the game with two wins in a row, the case has been exactly the opposite for the Rajasthan. The Chepauk track came under fire for producing just 141 runs in the season opener so this will be an aspect that will be looked at closely.

Rajasthan’s batting, despite the losses it must be said, has been mighty impressive. While Jos Buttler was the star in the first game, Sanju Samson and skipper Ajinkya Rahane were terrific in the second. They need to avoid batting collapses though and also would be hoping for Steve Smith to get a big score, just like David Warner. 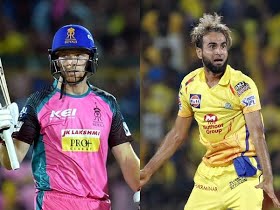 Rajasthan’s bowling unit has disappointed so far. Jaydev Unadkat, once again, is failing to justify his high price. Only Shreyas Gopal with 3/27 had a memorable last outing. They will need to get their act together against a talented Chennai outfit.

For Chennai, their bowlers have been in fine form. Harbhajan Singh, Imran Tahir and Dwayne Bravo have all been among the wickets while Ravindra Jadeja too has made his mark with wickets. Spinners are Chennai’s key weapon so MS Dhoni will look to attack with them.

Their batting has surprisingly not been as impressive. But, with the likes of Suresh Raina, all-rounder Shane Watson, Kedar Jadhav, Bravo and Dhoni, it is only a matter of time before they get their act together. On current form and personnel, Chennai should fancy their chances.

--By A Cricket Corespondent